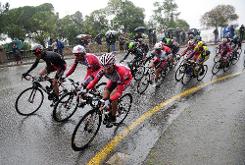 Belgian cyclist Phillipe Gilbert of BMC team drinks a beer on the podium after winning the 49th edition of the Amstel Gold Race, 251.8km cylcling race from Maastricht to Valkenburg, on April 20, 2014 in Valkenburg

Belgian Jelle Vanendert escaped from a group of chasers to take second, five seconds back, while Australia's Simon Gerrans out-sprinted Spain's Alejandro Valverde and Pole Michal Kwiatkowski for third a further second behind.

Gilbert's attack on the final climb was reminiscent of the same move he made to win the 2012 world title here in Valkenburg.

He had showed his form in the lead-up to this race by winning Wednesday's Brabantse Pijl and when he kicked for home, no-one could live with him.

"It's always important to win, first and foremost I'm a winner and that's why I like to win," said Gilbert, who had to wait until September and the 12th stage of the Tour of Spain last year before finally landing his first win of the season.

"(Winning) gives the team confidence. It was very important to win on Wednesday, it's a semi-Classic too and one of the best races on the calendar.

"I was delighted to win, it gave me confidence and put me in the ideal situation for today."

He is now second only to five-time winner Jan Raas of the Netherlands for Amstel victories and on this kind of form, Gilbert could be forgiven for aiming a tilt at a second Ardennes treble, having already added Fleche Wallonne and Liege-Bastogne-Liege wins to his Amstel success in 2011.

The main breakaway of the day saw 10 riders go clear inside the first 10km with the final two in that group, Frenchman Christophe Riblon and Belgian Preben Van Hecke staying out in front until the final 10km.

By that time an ambitious attack from France's Thomas Voekler 40km out had seen a dangerous group form that included Greg Van Avermaets, Jakob Fuglsang and Zdenek Stybar.

That forced the Movistar team of Valverde, a two-time Liege and once Fleche Wallonne winner, to take responsibility for the peloton's chase until Stybar dropped out of the group up the road and his Omega-Pharma team chipped in.

But their lead over the peloton lasted only a couple more kilometres before Gerrans's Orica-GreenEdge team took over the pace setting.

The rhythm was furious leading up to the final ascent of the Cauberg -- a climb tackled four times during a 251.8km race that included 34 climbs.

Spaniard Sanchez was first to attack but it was little more than a ruse, forcing Kwiatkowski, Valverde and Gerrans, the 2012 winner of Milan-San Remo, to follow before Gilbert made his move on the other side of the road as Sanchez faded.

"I was well led up to the start of the Cauberg by Marcus Burghardt who did well and put me in a good position," said Gilbert.

"We had planned on Sanchez attacking at the foot of the climb so I wasn't surprised but the competition was a bit more.

"They had to react, I waited for the moment I thought was the best and that was when it hurts the most.

"So I waited for it to really hurt to accelerate, but then you have to resist.

"I took the inside of the bend but then you have to concentrate 100 percent."