Manchester United manager David Moyes maintains that there are positives for the club's fans to cling to despite them being out of contention for the Champions League. 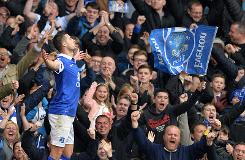 Last season's champions suffered an 11th Premier League defeat of the season when they lost 2-0 at Everton on Sunday.

United were already guaranteed their worst points tally since the start of the Premier League era in 1992 and the result at Goodison Park means that it is no longer possible for them to finish in the top four.

Moyes, however, is adamant that the supporters understand the problems he has faced in taking over from Alex Ferguson and is sure that he can turn the situation around.

"I think everybody knows that we are on track to make changes and do some different things. We are rebuilding. We have got things we want to do," he said.

Nemanja Vidic is leaving for Inter Milan, and Patrice Evra and Rio Ferdinand will soon be out of contract, and there were reports in the British media on Sunday that England forward Danny Welbeck will also seek a move at the end of the campaign.

The 23-year-old youth product has two years to run on his contract and is said to be unhappy at Old Trafford.

In response to the reports, Moyes said: "Danny Welbeck is really important to me and I really value him.

United only managed two shots on target in a disappointing performance that saw them beaten by a Leighton Baines penalty and a Kevin Mirallas goal.

But despite their lack of attacking thrust, Moyes defended his team's performance.

"We couldn't find the telling pass, or clever play in the final third that makes the difference," said the former Everton manager.

"I thought we did well. We were the better team at 2-0 down in the first half. We had good play, we had good control of the game, we had the bulk of the ball. I thought the two goals we conceded were rank, rotten."

Everton are a point behind fourth-place Arsenal with three matches remaining and two points behind third-place Manchester City, who have two matches in hand and visit Goodison Park in a fortnight.

Martinez, whose side also won 1-0 at Old Trafford in December, believes that doing the double over United is further evidence of his team's progress since he took over last year.

But the Spaniard remains grateful to Moyes for the legacy he left behind after his 11-year spell at Goodison Park.

"We knew that since 1969 we hadn't done the double over United and that's when we won the league," said Martinez.

"It tells you this group is ready to develop into something special. It's a mental thing for the side if you win the double over the champions.

"When I arrived at Everton, I said straightaway I was fortunate to walk into a club where everything was in place.

"Previously I went into clubs and it looked like a bomb had exploded, and the best situation for a manager is to have that (what he found at Everton).

"The younger players have got a big role in this team and if they make mistakes, I take responsibility. David Moyes's job at Everton has been the platform of the performances we've put in."

ROME: At the Locri hospital in southern Italy, patients are often sent elsewhere for lack of doctors, the lifts are endlessly in disrepair and the CT scan works one day, but not the next.