Germany reached their first Fed Cup final since 1992 on Sunday -- where they will face the Czech Republic, who will be playing in a third title match in four years. 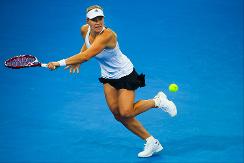 Germany completed a 3-1 victory over Australia in Brisbane while the Czechs, the 2011 and 2012 winners, defeated defending champions Italy 4-0 in Ostrava.

The Czech Republic will host the final of the women's international tennis competition on November 8-9.

Angelique Kerber put Germany into their first final in 22 years -- the last time being when Steffi Graf starred in the win over Spain -- with a fighting victory over Samantha Stosur.

World number seven Kerber fought back from dropping the opening set to beat former US Open champion Stosur 4-6, 6-0, 6-4 in two hours, 14 minutes to give Germany an unassailable 3-0 lead.

The Australian pair of Casey Dellacqua and Ashleigh Barty prevented a wipe-out when they claimed the "dead" doubles rubber 6-2, 6-7 (5/7), 10-2 over Julia Goerges and Anna-Lena Groenefeld.

"It’s a very special moment for me and the whole team," Kerber said.

"It feels great. I played a good match but it was a tough one because Sam was playing also very tough, and I have never beaten her before."

Germany celebrated their victory by flying back to Europe in their pyjamas.

"We'll be flying home in pyjamas, that was the deal," Andrea Petkovic told SID, an AFP subsidiary, after the team had previously said they would don nightwear that had been gifted from the Australian team for the 24-hour flight home via Dubai, if they won.

There was also a practical reason for the unusual dresscode.

After arriving in Germany, Kerber and Petkovic will fly straight to Stuttgart for the WTA claycourt tournament, which starts on Monday, and they will need all the rest they can get for their matches on Tuesday or Wednesday.

But for Australia's Stosur, "it was overall reasonably disappointing, especially when you don't get through."

"I don’t know if I can fight any harder than I did in that match."

- Czechs headed back to final -

In Ostrava, Petra Kvitova, the world number six and a former Wimbledon champion, saw off 20th-ranked Roberta Vinci 6-3, 7-5 in an hour-and-a-half to hand the Czechs an unassailable 3-0 lead.

Klara Koukalova and Andrea Hlavackova then earned the fourth point for the hosts after beating Camila Giorgi and Karin Knapp 6-2, 5-7, 11-9 in the dead doubles rubber.

"I'm happy we've made it, and it will be a pleasure for the whole country to host the final again," said Kvitova, praising her fellow players as "a superb team".

In the World Group play-offs, where the winners will play in the elite section in 2015, Russia, playing without Maria Sharapova, beat Argentina 4-0 in Winter Olympics host city Sochi.

Radwanska won both her singles and then teamed up with Alicia Rosolska to beat Anabel Medina-Garrigues and Silvia Soler-Espinosa 6-4, 6-2 in the deciding doubles.

Canada are headed to the elite World Group for the first time after a 3-1 victory over Slovakia in Quebec City.

The hosts took a 2-0 lead with two singles victories on Saturday, and Eugenie Bouchard earned the winning third point with a 7-6 (8/6), 6-3 win over Jana Cepelova in Sunday's first match. Slovakia won the meaningless doubles rubber.

In St Louis, France edged 17-time champions the United States 3-2, with Caroline Garcia and Virginie Razzano teaming up to claim the decisive point in the final rubber with a 6-2, 7-5 doubles win over Sloane Stephens and Madison Keys.

As on Saturday, they split their singles matches, Stephens easing past Razzano 6-2, 6-4 before Garcia defeated Keys 6-4, 6-3 to knot the tie at 2-2 and set the stage for the decisive doubles.