Maria Sharapova opens her claycourt season in Germany this week where she hopes to claim a hat-trick of Stuttgart titles and her 30th WTA career trophy. 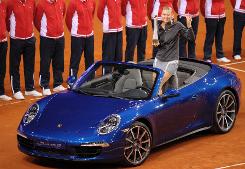 Maria Sharapova holds her trophy in the winner's prize, a Porsche 911 Carrera 4 S Cabriolet, after defeating China's Li Na in the final of the WTA Porsche Tennis Grand Prix in Stuttgart, southwestern Germany, on April 28, 2013

The defending champion is unbeaten at the indoor tournament having won both the 2012 and 2013 crowns on her two previous appearances.

"I've competed here for the last two years and won both times, so I have only positive memories," Sharapova told the Stuttgarter Nachrichten.

"I don't want to miss out on an experience like this."

Sharapova, who turned 27 on Saturday, enjoyed her last title in the 2013 final when she beat China's Li Na with a commanding display before losing in straight sets to Serena Williams in the French Open final.

World number one Williams, who enjoyed her 15th straight win over Sharapova in the Miami semi-finals last month, is absent from Stuttgart, but seven of the world's top 10 will be battling it out to reach next Sunday's final.

"I am a person who loves the challenges and I don't go out of my way to avoid anyone," said Sharapova when asked if she was glad not to face Williams in Stuttgart.

"Serena has been playing her most successful tennis in recent years and my aim must be to learn from the defeats against her and work to get to her level."

Injury to her right shoulder means Sharapova has dropped to ninth in the world rankings.

"At the moment, it's a little hard for me to look at the world rankings, but it's not a problem," she insisted.

"Because of my success at Grand Slams, I expect a lot of myself, but I have to be realistic and after an injury like that you need time to get back to your best.

"I was out of action for four months and hardly played after last year's French Open. But I'm back to 100 percent now and I want to win in Stuttgart."

Sixth-seed Sharapova will face the Czech Republic's Lucie Safarova in the first round in Stuttgart.

She has a 3-1 lead in her series against the 27-year-old with her most recent win coming in the third round at Miami.

In addition to Sharapova and Angelique Kerber, Germany's number one, Poland's Agnieszka Radwanska, plus former world number ones Caroline Wozniacki, Jelena Jankovic and Ana Ivanovic will also feature in Stuttgart.

Having arrived at last year's tournament with enough baggage to fill two cars, Sharapova admitted she may not be travelling light to Stuttgart on this occasion either.

"I had to let them (the organisers) know straight away that I'd need another car again this time too," she laughed.

"I'll be in Europe for the next two months and therefore I have a lot of gear with me -- racquets, equipment and a few other things."

Having won all four Grand Slam titles in her career, including Wimbledon as a 17-year-old in 2004, Sharapova admits there is one title she really wants to claim.

"Olympic gold at Rio 2016 would be wonderful," she revealed, having lost the 2012 Olympic final to Williams.

"I was really impressed by London and there is something unique for a tennis player, as we're normally on our own, to be part of huge team and live in the Olympic Village," she said.

"It would be a life-long dream to play for gold again in Rio de Janeiro."