Russia manager Fabio Capello on Monday set the quarter-finals as his team's minimum objective at their first World Cup finals since 2002. 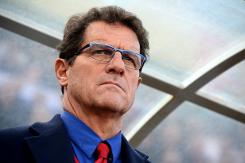 Russia national football team manager Fabio Capello pictured before the FIFA 2014 World Cup friendly between Russia and Armenia in the city of Krasnodar on March 5, 2014

The Italian also revealed that he planned to retire after the 2018 World Cup in Russia.

On his hopes for the upcoming 2014 edition Capello quoted by R-Sport news agency said: "We want to reach the quarter-finals in Brazil but sometimes if you play really well any surprises are possible.

"Just remember that nobody expected us to finish top of our qualifying group but we did it."

He added: "Russia's players are completely focused on the World Cup.

"After 12 years of absence at the world football feast they want to perform at their best, to win something. And they're ready to show their best to achieve a top-class result in Brazil."

"Russia is my last job. I want to be like Alex Ferguson. He quit at 72, I will resign being a year younger."

Capello explained why he had decided to prepare his squad for Brazil in Moscow.

"I know the Russians," he said.

"It's very important for them to be with their families. Here, in Russia we have such opportunities. We have all the necessary conditions here and I decided to prepare for the World Cup in Moscow."