Less than 12 months after awarding David Moyes a six-year contract, Manchester United are searching for another new manager following the Scot's dismissal on Tuesday. 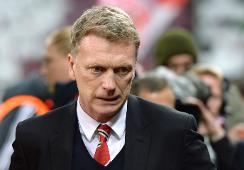 While player-coach Ryan Giggs has been placed in interim charge until the end of the season, the club will now look to appoint a long-term successor to Moyes capable of restoring the club to former glories.

Here, AFP Sports looks at five issues that will be on the top of the new man's in-tray:

1. Bring the style back

- The statistics ultimately did for Moyes -- 11 league defeats; 23 points below leaders Liverpool; no Champions League qualification for the first time since 1995 -- but the abrupt disappearance of the United swagger was equally disconcerting. Under Alex Ferguson, United were renowned for their dashing football and never-say-die spirit, but under Moyes they looked like a team without a soul. Gone were the thrilling counter-attacks and injury-time goals, replaced instead by a listless tactical conservatism that reached a nadir in February when United lumped a Premier League-record 81 crosses into the box during a 2-2 draw at home to Fulham. In Moyes's last game in charge, a 2-0 defeat at his former club Everton, United dominated possession, but did nothing with it. "Possession football, meaningless football, against clinical football," was the damning verdict of former United stalwart Gary Neville.

- While Moyes's successor will find a cluster of renowned attacking players at his disposal, he will also inherit a defence that has been creaking badly ever since Ferguson retired in May last year. Captain Nemanja Vidic has already agreed to join Inter Milan and both Rio Ferdinand, 35, and Patrice Evra, 32, will soon be out of contract. At 23, right-back Rafael da Silva has time on his side, but he has turned in several erratic performances of late, while Phil Jones, Jonny Evans and Chris Smalling have been exposed at times as well. A new central midfielder remains a key requirement, but the reconstruction of the United back four is likely to be the principle focus of the anticipated close-season recruitment drive.

3. Devise a system that accommodates Rooney and Mata

- United fans rejoiced when Moyes prised Juan Mata from Chelsea for a club-record pound sterling37.1 million ($61.2 million, 44.8 million euros) fee in January, but the Spaniard's Old Trafford career is yet to catch fire. He was typically used on the right of an attacking midfield triumvirate by Moyes, as the number 10 role that he covets is currently the exclusive domain of Wayne Rooney. Shinji Kagawa, a Ferguson signing who has also failed to find his feet, is another player who prefers to play as a central playmaker, and the new manager's ability to devise a system that successfully accommodates at least two of those players could determine his chances of success.

- Ferguson famously elected to exert control over the media simply by shutting them out, and stories of changing-room unrest were few and far between during his 26-and-a-half-year tenure. The code of omerta appeared to disintegrate under Moyes, however, as reports of disagreements between him and players including Ryan Giggs, Robin van Persie and Danny Welbeck filtered out into the press. If his successor is to get the whole club pulling in the same direction, he will need to be able to trust his players to keep their own counsel.

- Whereas opposition teams used to quake at the prospect of a visit to Old Trafford, during Moyes's brief reign a trip to United's ground came to represent an opportunity to pull off a famous upset. West Bromwich Albion, Everton and Newcastle United all registered long-awaited league wins at Old Trafford, while Swansea City and Sunderland both enjoyed success there in the domestic cup competitions. Successive 3-0 defeats by Liverpool and Manchester City further dampened the atmosphere and that unfamiliar sense of vulnerability will need to be washed out of the stadium's corridors before United can even think about returning to the summit of the European game.