Blanc confident of Ibra return as PSG close on title

Paris Saint-Germain coach Laurent Blanc on Tuesday reiterated his belief that injured top scorer Zlatan Ibrahimovic will play again before the end of the season. 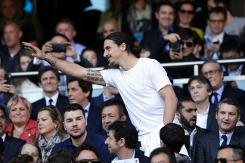 Paris Saint-Germain's injured Swedish forward Zlatan Ibrahimovic waves from the stands ahead of the French L1 football match Paris Saint-Germain vs Reims at the Parc des Princes stadium in Paris on April 5, 2014

"The objective is for him to play again before the end of the season. It's a realistic target. The signs are good, but we can't just do anything with him for fear of a recurrence," said Blanc at a press conference prior to PSG's Ligue 1 meeting with Evian at the Parc des Princes on Wednesday.

Ibrahimovic injured his right thigh in the first leg of PSG's Champions League quarter-final against Chelsea at the start of this month and then returned to his native Sweden for a week for personal reasons before coming back to the French capital on Monday.

The Swede, who has scored a club record 40 goals in all competitions this season, missed last Saturday's 2-1 win against Lyon in the League Cup final as PSG secured the first of a likely trophy double.

A win against Evian on Wednesday will leave the defending champions 10 points clear of second-placed Monaco with only four games left and will mean they can clinch another Ligue 1 title with a win at Sochaux on Sunday.

However, PSG lost 2-0 away to Evian when the sides last met in December, and Sochaux are currently in excellent form as they attempt to pull off a miraculous escape from the relegation zone.

"If we can wrap up the Ligue 1 title this week it would be a very, very good thing," said Blanc. "We need to take points. We have a match at home and we owe it to ourselves to respect Evian, especially as they were the only team to beat us in the first half of the season.

"They will be two difficult games but we need to get points to finish off the job."

Influential midfielder Thiago Motta will be missing for the game due to suspension, and his absence could be keenly felt given that PSG have been beaten just once in the 55 Ligue 1 games he has played since signing from Inter Milan in January 2012.

Opponents Evian, who as well as beating the capital side in the reverse fixture have taken four points off Monaco this season, are currently five points clear of the relegation zone.

"We are not going just to visit the capital, or the Parc des Princes for that matter, even if it is magnificent stadium," said Evian coach Pascal Dupraz.

"We will be going there to get a result, first and foremost because we need one."

Elsewhere on Wednesday, Lyon travel to Toulouse knowing that a win will take them level on points with rivals Saint-Etienne in fourth and will also move them five points clear of Marseille in sixth.

OL will almost certainly not make next season's Champions League, and they must finish in the top five to qualify for the Europa League.