All eyes on Gilbert ahead of Fleche Wallonne
Sports

All eyes on Gilbert ahead of Fleche Wallonne

Philippe Gilbert's tour de force on the Cauberg climb during Sunday's Amstel Gold Race did more than bring him a third title in the Netherlands, it also established him as the favourite for Wednesday's Fleche Wallonne. 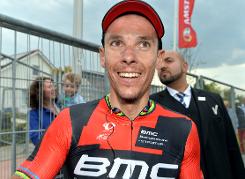 Belgium's Philippe Gilbert of BMC Racing Team, seen after winning the 49th edition of the Amstel Gold Race, in the Netherlands, 251,4 km from Maastricht to Valkenburg, on April 20, 2014

In a stunning demonstration of power and acceleration, the 31-year-old Belgian demonstrated he is back to the form that brought him an Ardennes Classics treble in 2011.

Back then he won his second Amstel Gold Race before going on to add Fleche Wallonne and Liege-Bastogne-Liege success as well.

And last Sunday when Gilbert attacked inside the final 3km on the steepest part of the punishing Cauberg climb, his ability to accelerate away from the competition and win by five seconds left his rivals gasping in awe and wonder.

"Gilbert was the strongest in the race. We saw that when he attacked on the Cauberg that we was strong enough to maintain that until the finish," said Australian Simon Gerrans, who had to settle for third in Valkenburg.

Gilbert's show of strength has left some riders' confidence a little dented ahead of the Fleche Wallonne, with even Spaniard Alejandro Valverde, the 2006 Fleche winner, struggling to find answers.

"It's clear that winning is always very difficult and we have to congratulate Gilbert, he was way superior to the rest of us," said the 33-year-old Movistar rider, fourth in the Amstel.

However, as a double winner in Liege as well, Valverde is sure he can still compete in the next two races this week.

"I've shown that I can win. I can be up there, whether I actually do win or not. Either way, chapeau to Gilbert," he added.

Gilbert's main competition at Fleche was expected to come from the Russian Katusha team and Spanish pair Dani Moreno and Joaquim Rodriguez.

But the latter crashed out of Amstel after 80km and although he expects to ride, he is unsure of his condition.

Rodriguez, the 2012 winner atop the Mur de Huy, had an X-ray following his Amstel crash and admitted afterwards that he might not be fully fit until next month's Giro d'Italia.

"It will possibly be difficult these next few days in the Classics but I'll definitely start the Giro," he said on Twitter.

If Rodriguez does pull up to the start line fully fit then it could pre-empt a thrilling battle between Gilbert and Katusha.

Both Rodriguez and Moreno, the reigning champion, are more suited to the Fleche's brutal final climb, the Mur de Huy (wall of Huy).

It averages at nine percent but has one section that reaches 25 percent.

The smaller lighter pair of Rodriguez and Moreno, particularly working in tandem and attacking separately, are more suited to accelerating over such a steep section than Gilbert.

But the Belgian's BMC team proved tactically astute at Amstel where Samuel Sanchez, who will again support Gilbert, launched a dummy attack on the Cauberg, forcing Valverde, Gerrans and Pole Michal Kwiatkowski, who finished fifth, to chase him down, allowing Gilbert to attack on the other side of the road and gain a crucial gap he never relinquished.

The Fleche should come down to a similar hectic finish on the final climb, preceded by a frantic chase up to the base of the Mur de Huy by a sizeable peloton, as was the case at Amstel.

Around 70 riders were in the peloton when it reached the Cauberg and with the Fleche 50km shorter at just 199.5km, there is likely to be at least that number racing for position at the foot.

Valverde, Gerrans, Kwiatkowski and others such as Ireland's Daniel Martin, Portuguese world champion Rui Costa or even surprise second-place finisher in the Amstel, Belgian Jelle Vanendert, could all figure prominently, even though for some it is Sunday's Liege-Bastogne-Liege that offers greater possibilities.

One name to look out for is Colombian Paris-Nice winner Carlos Betancur, for whom the Huy finish is ideal, or Dutchman Tom Jelte Slagter.

LONDON - US President Donald Trump promised to pardon WikiLeaks founder Julian Assange if he denied Russia leaked emails of his 2016 election rival's campaign, a London court was told on Wednesday.

BEIJING - China on Wednesday ordered three reporters from The Wall Street Journal to leave the country over what Beijing deemed a racist headline, in one of the harshest moves against foreign media in years.