Nadal wins but Ferrer crashes out in Barcelona
Sports

Nadal wins but Ferrer crashes out in Barcelona

Rafael Nadal began his bid for a record ninth title at the Barcelona Open on Wednesday with a 7-6 (7/2), 6-4 defeat of journeyman Albert Ramos with his chances also boosted as four-time finalist David Ferrer crashed out. 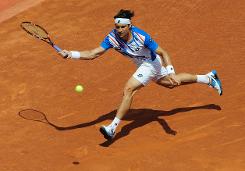 Nadal, the top seed, put his loss last week in the Monte Carlo quarter-finals to Ferrer out of his mind in a match lasting just over two hours against compatriot Ramos in a battle of left-handers.

Nadal's second-round win lifted his record at the event to 41-1.

"It was a positive victory for me," said Nadal.

"I didn't play my best match, but after the defeat in Monte Carlo, the next match on court was never going to be easy. I am happy with the way I fought and proud of the victory today.

"I had to accept that I was going to be made to work today and that I'm not playing at my best level - but I got through it."

Nadal spent 64 minutes in claiming the opening set against Ramos, ranked 103, who also lost to Nadal here in a 2013 quarter-final.

Nadal found his comfort zone in the second set to secure the win and a Thursday match against Croatian Ivan Dodig, who hammered Spanish 13th seed Feliciano Lopez 6-1, 6-4.

"He just played a better match today, there is nothing else to say," said a gracious Ferrer.

"He had more power in his shots. I had some chances at the end of the first set but I couldn't take them.

"When I lost serve early in the second things got even worse. I felt fine on the court and was prepared physically and mentally."

Last season Ferrer was defeated at the same stage, going out to Dmitry Tursunov after losing a quartet of finals to Nadal over the years in the Catalan capital.

Gabashvili won the opening set in 44 minutes with a break in the final game, when Ferrer hit the net trying to return a forehand drive.

The Spaniard was able to convert on only one of six break points in the opener as his opponent successfully defended.

In the second, the challenger did not let up, breaking the unsteady Ferrer for 2-0 and finishing off the upset as he broke Ferrer to win it on a second match point, with the Spaniard putting a forehand long into the corner.

Gabashvili, ranked 55th, is playing in Barcelona for the eighth time and had never got further than the second round.

"I knew I had to be steady and in control, and I managed to do that," said the winner. "This is my best win ever."

Ferrer went down in 80 minutes, converting only one of eight break point chances while losing his own serve four times and serving four double faults.

The victory was the best for Gabashvili since upsetting Andy Roddick in the third round of the French Open four years ago.

"It was a tough match, he gets a lot of balls back and makes life difficult," Montanes said.

"I'm playing well and my confidence is high, it's a good moment for me. The secret right now seems to be in good mental preparation."