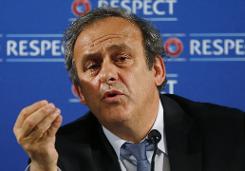 UEFA president Michel Platini speaks during a press conference on the eve of the qualifying draw of the 2016 European Football Championship on February 22, 2014 in Nice, southeatern France

"I think significant sanctions will hit the big clubs. We are going to take this to the end," Platini told Le Parisien newspaper in an interview.

"The first decisions will be announced in early May. But if you expect blood and tears you will be disappointed," he added.

"There will be some tough things but no exclusions from European competitions," he said.

Platini did not mention any team that faces sanctions but said he was "not sure" that Paris St Germain follow UEFA's financial fair play rules.

Paris is owned by a subsidiary of the Qatari Investment Authority which has invested massively to turn it into a powerhouse in Europe. Laurent Blanc's team, with Swedish striker Zlatan Ibrahimovic as centrepiece, reached the quarter finals of the Champions League this year.

Paris has a sponsorship deal with the Qatari Tourism Authority which paid about 200 million euros in 2012-13, 50% of the club's budget for the season.

The contract is "innovative", said Platini. "It is the least we can say."

The UEFA boss said this was the path taken by Paris leaders to balance their budget. "But does PSG respect the financial fair play rules. Not sure ... not at all sure," commented Platini.

"Let's just say that the economic model of PSG is unique and not normal," he added.

Manchester City is owned by Abu Dhabi United Group whose resources have made it one of the wealthiest clubs in the world.

Under the UEFA rules, clubs are not meant to make losses of more than 45 million euros ($62 million) during the 2011-12 and 2012-13 seasons. Some spending, such as new infrastructure, is exempt however.

City reported losses of pound sterling149 million (180 million euros) for 2011-13. But the club has cut the losses and expressed confidence that it can quickly break even.

Platini said he was sure that the financial fair play rules, intended to make clubs operate within their means, have had an impact.

Thai Airways International may lease aircraft along with cabin staff as part of fleet and service improvement options.

Fears about risks to the economy are growing after 174 MPs requested a Constitutional Court ruling on the validity of the 3.2-trillion baht budget bill.

Harry, Meghan, their new neighbours and the paparazzi

VICTORIA (CANADA) - In explaining his decision to give up his work as a senior member of Britain's royal family, Prince Harry laid part of the blame at the feet of the media, which he called a "powerful force."