Japanese fourth seed Kei Nishikori eased into the quarter-finals of the Barcelona Open on Thursday with a 6-0, 6-4 victory over Kazakstan’s Andrey Golubev. 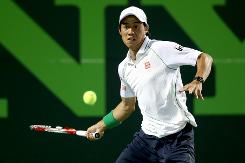 Kei Nishikori of Japan returns a shot to Roger Federer during the Sony Open at the Crandon Park Tennis Center on March 26, 2014 in Key Biscayne, Florida

Nishikori is making his first appearance of the season on clay in the Catalan capital and after struggling past Roberto Bautista Agut in three sets on Tuesday, he seemed more at ease as he equalled his best-ever run in Barcelona by reaching the last eight.

The world number 17 is likely to face a tougher task on Friday, though, when he faces either Marin Cilic or Tommy Robredo for a place in the semi-finals.

Ninth seed Ernests Gulbis also secured his place in he quarters with a straight sets 7-5, 6-1 win over Albert Montanes.

The Latvian will face Russia's Teimuraz Gabashvili in the last eight after he continued his fine week after shocking second seed David Ferrer on Wednesday with a 6-4, 6-2 win over Inigo Cervantes.

Top seed Rafael Nadal will be last on court on Thursday as he continues his quest for a ninth title in Barcelona when he faces Croatia's Ivan Dodig.