Brazil coach Luiz Felipe Scolari on Thursday revealed eight of his squad for the World Cup, including four skippers, while adding he has no concerns with the form of striker Neymar. 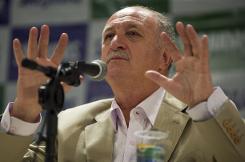 He added he was also picking Chelsea trio Willian, Oscar and Ramires and Tottenham's Paulinho.

"I spoke with five players in London and told them I was counting on them," said Scolari, who recently visited players based in Europe.

Scolari, who led Brazil to their last World Cup triumph in 2002 in Japan, Thursday addressed a congress on football and psychology at Sao Judas University in Sao Paulo.

Asked about Barcelona star Neymar, embroiled in controversy over the cost of his transfer last year from Santos and questioned at times over his performances for the Catalan club, Scolari defended the forward.

"Neymar is calm. His team is not doing so well but in the national team he will perform as he always does. I see him in very different form than the one some Spanish journalists judge him to be in," said Scolari.

And he insisted he had "zero concerns" with the star.

In an hour-long address, Scolari spoke of his early career as player and coach then said that he was decided "between 95 and 99 percent" on his final 23-man squad which he hopes can land a sixth World Cup crown for the Selecao.

He insisted that although most people would be able to work out the squad for themselves, he had not told his technical staff -- nor his wife.

Scolari also spoke on the issue of the importance of a player's mental strength and how, at last year's Confederations Cup, which saw Brazil beat Spain in the final, the players had drawn on that strength to triumph.

He noted there had been some doubts about the team voiced beforehand while the squad had to deal with large public demonstrations against the cost of hosting major events in a country where infrastructure lacks investment.

But once the crowd belted out the national in Fortaleza ahad of a match against Mexico the players took heart from the "euphoria" which that generated.

Brazil won and went from strength to strength.

After the squad is unveiled on May 7, Brazil will from May 26 meet up at their Teresopolis base outside Rio to prepare for group matches against Croatia, Mexico and Cameroon.