A stunning individual effort from Miralem Pjanic and a second-half tap-in from Gervinho secured a 2-0 home win for Roma against Milan and dented the Rossoneri's bid for a Europa League place next season. 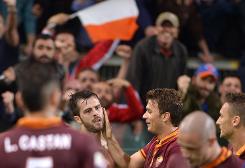 Roma's midfielder Miralem Pjanic (L) celebrates after scoring during an Italian Serie A football match against AC Milan on April 25, 2014 at the Olympic stadium in Rome

Roma's 26th win of the campaign reduced the gap to leaders Juventus to five points.

Roma, who last week secured the league's second automatic qualifying spot for the Champions League, had beaten Milan only once in the sides' last six league encounters.

But on the back of what has been a record-setting season for the capital club, and with Milan struggling amid what has been one of their worst campaigns, Roma were fully expected to prevail at the Olympic Stadium.

Roma coach Rudi Garcia hailed Pjanic's impressive opener for the hosts, and gave fans a glimmer of hope when he said Juve could be under par having suffered a 2-1 defeat in the first leg of their Europa League semi-final to Benfica on Thursday.

"We made a lot of mistakes in the opening exchanges but after Pjanic's goal, which was pure class and a par with (Diego) Maradona, we went on to secure a deserved win," the Frenchman told Sky Sport.

"It could be tough for Juve on Monday. They had their first leg against Benfica yesterday and will have the second next Thursday."

Milan were brimming with the confidence of five consecutive wins but apart from half chances from Kaka and Mario Balotelli, Clarence Seedorf's side offered little real threat in a tentative opening half.

Kaka gave the visitors some early hope when he pounced on a poor Dodo pass to charge towards goal, only to see his effort blocked by midfielder Daniele De Rossi.

With 14 league goals this campaign, Balotelli is enjoying his most prolific season to date but the Milan striker showed little threat and was eventually replaced by Giampaolo Pazzini on 69 minutes.

Balotelli was unhappy at his replacement but Seedorf brushed off their brief exchange on the sidelines.

"He didn't say anything -- everything's fine," said the Dutchman.

Balotelli, meanwhile, hit out at television commentators who suggested he had shown little movement on the pitch.

"Whoever says that doesn't know anything about football, believe me," said the Italian international. "If Milan lose, it's always my fault."

Asked why he may had been taken off, Balotelli added: "I didn't understand why."

Before then, Roma had threatened shortly before the interval when De Rossi blasted over from a short corner and the breakthrough, when it came, raised the roof at the Olympic Stadium.

Bosnian midfielder Pjanic took possession in Milan's half and proceeded to dribble his way past three players before stroking the ball low past Christian Abbiati in the Milan goal.

Milan resumed as they had started the opening half, and were made to pay on 69 minutes when Gervinho pounced on the rebound from Francesco Totti's angled strike to tap into the Milan net for Roma's second.

Milan remain seventh and are still mathematically in contention for a top-five finish.

However, depending on how Torino, Lazio and Verona -- all of whom are two points further adrift -- fare in their respective fixtures this weekend, the Serie A giants could find themselves back in the lower half of the table.

Torino host Udinese, Lazio are away to struggling Livorno while Verona host Catania, who are virtually relegated.