Japan's Kei Nishikori reached his second ATP final of the season with a 6-2, 6-4 win over Latvian Ernests Gulbis at the Barcelona Open on Saturday. 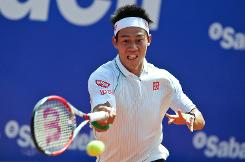 Nishikori, playing for the first time on clay under new coach and former French Open champion Michael Chang, was dominant on serve throughout and never faced a break point on his way to sealing victory in one hour 25 minutes.

The world number 17 will face Spaniard Nicolas Almagro or Colombian Santiago Giraldo in Sunday's final after Almagro stunned Rafael Nadal 2-6, 7-6 (7/5) 6-4 in the quarter-finals on Friday.

World number one Nadal, an eight-time Barcelona champion, suffered his first defeat in the Catalan capital since 2003.