Simon Gerrans is hoping his week off from racing will help him upset some of the favourites at Sunday's Liege-Bastogne-Liege race. 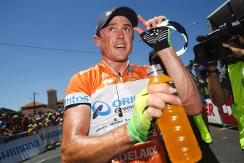 Simon Gerrans from Australia reacts after winning the 2014 Tour Down Under cycling race on January 26, 2014

The 33-year-old Australian is considered one of the main outsiders for victory in a race that has two outstanding favourites in Belgian Philippe Gilbert and Alejandro Valverde from Spain.

But while the rest of the contenders raced 199km at the Fleche Wallonne on Wednesday -- where Valverde won and Gilbert was 10th -- Gerrans was putting his feet up and relaxing.

"I feel good actually, I recovered really well from Amstel. I feel like my form's been progressing through this period this year so I'm hoping that I'm going to be going better this weekend than I was last weekend," the Orica GreenEDGE rider told AFP.

Gerrans was third at the Amstel Gold Race a week ago, the third time he had finished on the podium in the first of the three Ardennes Classics.

And although he admits he is more suited to the trek through the Netherlands rather than Sunday's 263km 'Doyenne' (the oldest race), Gerrans hopes his time off will make him fresher than his rivals.

"It's not different for me, I haven't done Fleche in a couple of years now. I just prefer to go home and freshen up," Gerrans said on Saturday.

"I think the chances of me winning Fleche are quite slim (his best result was eighth in 2009) and I think it would probably take a little bit more out of me than I would like for Liege.

"So I chose to skip Fleche, go home and freshen up and then come back here ready to go again.

"I wouldn't do it if I didn't think it gave me an advantage, I'm not going to do it if I thought it would be detrimental.

"For sure I could be racing Fleche if I want to but it's a choice not to."

Gerrans's best result in Liege, one of the five 'Monuments' of cycling, was sixth in 2009 but he has finished in the top 20 in each of the last five years, including coming 10th in 2013.

He is a specialist in one-day races having won Milan-San-Remo, the first of the five Monuments on the calendar each year, in 2012.

He also has stage wins in all three of the Grand Tours and is a record three-time winner of the Tour Down Under.

But he says the longer climbs on Liege-Bastogne-Liege than Amstel Gold do not entirely suit him.

"I'm more suited to Amstel. This is much more of a climber's race at Liege, the climbs are a bit longer, a bit harder.

"I think Amstel's kind of between a real climbers' race like Liege and say the Flemish Classics.

"My results have shown I'm better suited to Amstel but I've been in the top 10 a couple of times here at Liege.

"But it probably doesn't suit me quite as well as last weekend."

"Any of the guys that have won in the last couple of years are the big contenders, so they're the guys to be keeping an eye on in the final," said the Aussie.

European Super League: Who's saying what