Vince Carter drained a three-pointer to lift the Dallas Mavericks to a 109-108 victory over the San Antonio Spurs in game three of their opening round NBA playoff series. 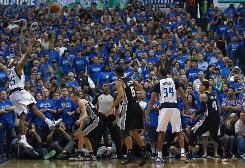 Vince Carter (L) of the Dallas Mavericks shoots the game winning shot against the San Antonio Spurs during Game 3 of their Western Conference quarter-finals of the NBA Playoffs, at American Airlines Center in Dallas, Texas, on April 26, 2014

The 37-year-old Carter caught an inbounds pass from Jose Calderon in the left side corner and faked Manu Ginobili of the Spurs. His off-balance shot at the buzzer sailed cleanly through the rim.

Moments earlier, Ginobili had given the Spurs a two-point lead with a running bank shot with 1.7 seconds left in the fourth quarter.

"Sometimes you need something like that," said Calderon. "I think we were fighting so hard for 48 minutes against a really good team. Coming up with that great shot at the end -- it feels great."

In the late Western Conference game, Reggie Jackson scored a playoff career high 32 points to lead the Oklahoma City Thunder to a 92-89 overtime victory over the host Memphis Grizzlies.

The Mavericks took a 2-1 lead in the best-of-seven series with game four set for Monday in Dallas.

It marked the second straight win in the series for the Mavericks, who had tied the series with a 113-92 road victory Wednesday to snap a 10-game losing streak to the Spurs.

The series could easily have been 3-0 for Dallas, but the Mavericks squandered a double-digit fourth-quarter lead in game one.

Monta Ellis led Dallas with 29 points, including 12 in the final quarter.

Tony Parker tallied 19 points while Kawhi Leonard scored 17 and Tiago Splitter chipped in 14 points and 13 rebounds for the Spurs.

"I think we did enough," said Parker. "We played good defence. We shot 54 percent on the road; that's great.

"You just have to keep the morale good in the locker room and come back strong on Monday."

San Antonio have won four of the last five games in Dallas.

Kevin Durant had 15 points and 13 rebounds and Russell Westbrook finished with 15 points, nine rebounds and seven assists for the Thunder, who evened their series at two games apiece.

Jackson, who was averaging just five points over the first three games, rose to the occasion in the third consecutive overtime game in the series.

"I was just trying to attack the basket. I am so thankful we came out with a win," said Jackson, who shot 11-of-16 from the field and grabbed nine boards.

Serge Ibaka had 12 points, 14 rebounds and five blocks for the second-seeded Thunder.

Marc Gasol had 23 points and 11 rebounds to lead the Grizzlies, who had a chance to tie the game at the end but Mike Conley missed shot from beyond the arc.

Game five is slated for Tuesday in Oklahoma City.