Veronica Campbell-Brown will take on world and Olympic 200m champion Shelly-Ann Fraser-Pryce in Shanghai Sunday as she returns to the Diamond League circuit after her doping controversy. 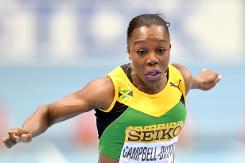 Veronica Campbell-Brown competes in the women 60m semi finals at the IAAF World Indoor Athletics Championships in the Polish coastal town of Sopot, on March 9, 2014

The Jamaican former Olympic champion spent 10 months on the sidelines before having a two-year ban overturned in February, and said she is still working her way back to full fitness.

"I’m working on getting back into a competitive spirit and getting race-sharp again," Campbell-Brown said, according to the International Association of Athletics Federations (IAAF) website.

"I just want to get better technically, because it’s all about preparing myself for the next two years... It’s good to be here in China with the world championships in Beijing next year."

Campbell-Brown was cleared because of procedural breaches when her urine sample was collected by Jamaican authorities last May, a failing slammed as "deplorable" by the Court of Arbitration for Sport.

Athletics has suffered other high-profile doping cases recently with US sprinter Tyson Gay handed a one-year ban and Jamaica's Asafa Powell hit with an 18-month suspension.

Campbell-Brown turned 32 on Thursday and but she will be getting no gifts on the track from compatriot Fraser-Pryce, who comfortably won the 100m at the Diamond League season-opener in Doha.

Justin Gatlin, who came back from a four-year doping ban in 2010, said he was hoping to run 100m below 10 seconds for the first time this year as he takes aim at Gay's US record of 9.69sec.

"I believe as athletes we have a duty to train as hard as we can and look for opportunities to break records. Records that stand for a long time put an event on pause.

"For me, I want to go out and break the US record. That’s my focus for this year and the next."

Other big names on the track include Olympic champions Aries Merritt and Allyson Felix, who are both hoping to reclaim some of their magic after a poor season last year.

Felix, 28, won the 200m Olympic title in 2012 but she crashed out of the race at last year's Moscow world championships with a hamstring injury. She will run the 400m in Shanghai.

Merritt suffered an injury scare last year in Shanghai, and the Olympic 110m hurdles gold-medallist placed only sixth in Moscow behind winner David Oliver -- whom he will face on Sunday.

In the field events, France's indoor world record pole vaulter Renaud Lavillenie will compete in China for the first time as he launches his campaign for a fifth straight Diamond race.

"I’m very happy to jump in Shanghai," he said. "It will be my first time in China and I’m excited about that."

Olympic triple jump champion Christian Taylor said he was eyeing an attempt to become just the fourth man to break the 18 metres barrier, after France's Teddy Tamgho achieved the feat to win the world title in Moscow.

"Before that the world record seemed unattainable, now it doesn’t. But it’s about taking baby steps towards it. Hopefully, I won’t need too many before I can get the big one," he said.

RATCHABURI: A suspected major online wildlife trader has been arrested and items including pelts of wild tigers and leopard cats, barking deer antlers and animal bones seized during a raid on a house in Pak Tho district.