Allyson Felix aims to get back on track in 2014
Sports

Allyson Felix aims to get back on track in 2014

Multi-medal winning athlete Allyson Felix said Saturday that 2014 would be a crucial year following her recent injury setback, as she aims to make an instant impact at the Shanghai Diamond meet. 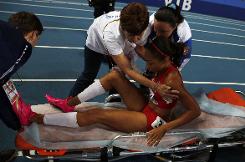 Allyson Felix is put on a stretcher after falling during the women's 200 metres final at the World Championships at the Luzhniki stadium in Moscow on August 16, 2013

The four-time Olympic gold medallist makes her season debut in Shanghai on Sunday after suffering a miserable 2013, crashing out of the 200m race at last year's Moscow world championships with a hamstring injury.

Felix, who took gold in the 200m in London, will be competing in the 400m in Shanghai.

"My focus last year was just all about the world championships as it always is, so that is where I was focusing to really peak at that time.

"And so when I had my injury things didn't go as planned, but you've just got to learn from the experience and keep moving," Felix told AFP.

"When you have an injury it kind of takes you back, so for me to able to build on this year is really important."

Felix won her other Olympic golds in London in the 4x400 and 4x100 relays, while she was also part of the successful US 4x400 relay team at the 2008 Beijing Olympics.

She is a previous Diamond League champion at 200 metres and 400 metres, but won only two Diamond races last year.

Jamaican sprint star Shelly-Ann Fraser-Pryce was one of the stars of last year's Shanghai meet, crossing the line first in the 100m. This year she is racing in the 200m.

The reigning two-time Olympic sprint champion has been in scintillating form, kicking off the 2014 Diamond League season with a comfortable victory in the women's 100m in Doha last week.

But Fraser-Pryce, who also claimed world 100m gold in Moscow and world indoor 60m gold in Sopot in March, said she will find time to relax this year as she bids to maintain her consistency.

"The main thing right now is just to kind of be consistent and also just to keep the pedal going, but not too much," she told AFP.

"I still want time to breathe and relax because it was a hard year last year and the year before, so I am looking forward to doing a lot more 200 (metres) and trying to take the season one step at a time."

Lavillenie said he is "three to four weeks" from reaching peak fitness after he was sidelined for five weeks with a foot injury -- immediately after he broke Sergei Bubka's world record by successfully clearing 6.16m in February.

But breaking Bubka's 20-year-old outdoor world record of 6.14m was not one of his immediate goals, he said.

"For me the goal this year is to be European champion and also to win the Diamond League. About the world record I am not thinking about it anymore," he told AFP.