SEOUL - North Korea will hold new talks with South Korea about taking part in the Incheon Asian Games after slashing the size of its delegation, a government official said on Friday. 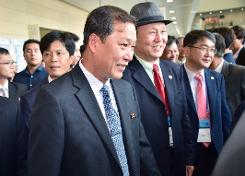 Yang Song-Ho (C), the dean of the Korean University of Physical Education in Pyongyang, arrives to attend an international conference on sport's role in improving relations among Asians, in Incheon, on August 20, 2014

Pyongyang officials walked out of a meeting last month, reportedly after Seoul proposed breaking with its custom of financially supporting sports teams visiting from the North.

"The government has accepted this proposal and it will plan to engage in necessary consultations with the North," he said. No date has been set for the talks.

Kim said North Korea had cut nearly 80 administrative staff from its proposed delegation, from 202 to 123. One hundred and fifty athletes are also listed.

He added there was no mention of the 350 cheerleaders -- the immaculately drilled troupe which usually accompanies the North's sports teams -- which Pyongyang previously proposed.

The backdrop to the to-and-fro over the Asian Games is a spike in cross-border tensions after the North carried out an extended series of rocket and missile launches.

South Korea and the United States on Monday launched an annual military drill, despite condemnation by North Korea which has threatened a "merciless" retaliatory strike.

Thousands of athletes, officials and fans will visit Incheon, near Seoul, for the quadrennial Asian Games from September 19 to October 4.