Facing the dilemma of having to prepare players for both the World Championship and the Asian Games, due to take place later this month, the Volleyball Association of Thailand has opted to name its strongest team for the Incheon tournament. 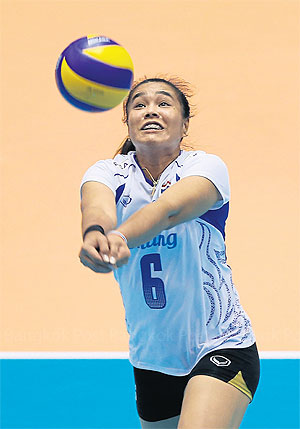 Two months ago, the association planned to send a team mixed with experienced and young players to both tournaments.

However, in an attempt to win the country's first ever volleyball medal in the Asian Games and the young players' unimpressive performance during training, the selection committee has decided to name its best 12 players to vie for glory in South Korea while the young team will play at the World Championship in Italy.

Thailand will start their campaign against Japan on Sept 21, followed by South Korea on Sept 23 and India on Sept 24.

According to VAT president Somporn Chaybangyang, it will the country's best chance to win an Asian Games medal because defending champions China and Japan will send their strongest teams to the World Championship.

"Both will have their second-string sides for the Incheon Games," he said, adding that only hosts South Korea would field their best players because they did not qualify for the World Championship.

"For us, the priority is to win a medal at the Asian Games."