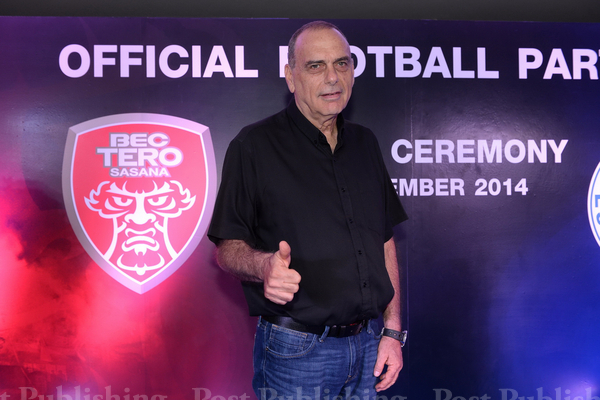 The 59-year-old Israeli, who was unveiled by the Fire Dragons on Tuesday, is the club's second high-profile official after former England manager Sven-Goran Eriksson, who was appointed to the same position in 2012.

He declined to promise if he would bring success to BEC Tero but said he would try to turn a club into a major force at home and abroad.

BEC are third in the TPL on 59 points, seven behind leaders Buriram United with six matches to go.

The league is taking a break for the Asian Games and will resume next month.

Procureur said: ''This is a very exciting time for the club to have a legend like Avram Grant working with us.

''Avram will attend our players' training sessions and oversee the players' technical development. This is a fantastic opportunity for our players to learn from such a highly respected coach.

''It reflects BEC Tero Sasana's commitment to doing all it can to produce the best results for the club and its supporters."

Under the deal, the two clubs will exchange coaches, players and knowledge with the aim to develop young players and build the teams' international profile.

As part of the co-operation, Cruzeiro will send two or three of their promising young players to train and play with the Fire Dragons.

Furthermore, BEC junior players will be invited to participate in Cruzeiro's U15 tournament each December.

BEC Tero chairman Brian Marcar said: ''This is an exciting project for both clubs and ushers in a new era for player development.''