BEIJING - Rafael Nadal and Serena Williams powered into the quarter-finals of the China Open Thursday, while world number two Simona Halep made the last eight, and then withdrew from the tournament through injury. 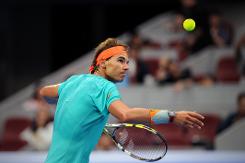 Rafael Nadal serves against Peter Gojowczyk at the China Open in Beijing on October 2, 2014

Williams, the top seed in Beijing, made it through after a scare in a back-and-forth game against Czech player Lucie Safarova that she eventually won 6-1, 1-6, 6-2.

It was another encouraging display from the second seed in Beijing, but Nadal recognises he is still far from his world-beating best following a wrist injury which forced him out of a string of tournaments.

"In general I need to improve. It's obvious," he said.

Nadal also criticised the balls that are being used in Beijing, saying: “If you throw the ball on the floor, the bounce goes everywhere."

But Nadal was well in control of the match, bar a last ditch show of resistance from his German opponent which was eventually snuffed out.

The Spaniard broke serve in the sixth game to clinch the first set, and again in the third game of the second set, after missing three break points.

Serving for the match at 6-5 ahead, Nadal appeared to be closing in on victory, as he earned match point following a 22-shot rally.

But Nadal finally wrapped up the game -- and the match -- when his 122nd ranked opponent failed to return a powerful serve.

Elsewhere in the men's competition, Czech world number six Berdych helped his cause in aiming to qualify for next month's ATP World Tour Finals in Great Britain when he made the quarter-finals.

The champion in Beijing in 2011 currently holds the eighth position in the race for London, the final berth for the end of season tournament involving the world's top eight players.

He beat Viktor Troicki in straight sets in his second round match, saving two break points in the third game before breaking his opponent and clinching the opener 6-3.

The pair traded serves midway through the second set before Berdych took a two-game lead which he held to finish the match 6-3, 6-4.

Berdych made the semi-finals in Beijing last year and will have to beat American John Isner to achieve the same feat this year.

Briton Andy Murray, who is also chasing points for London, made the quarter-finals at the expense of Pablo Cuevas.

Meanwhile, Slovak Martin Klizan beat Ernests Gulbis when the Latvian retired with a shoulder injury with the scores at 6-2, 3-0.

In the women's competition, second seed Halep overcame stubborn resistance from Andrea Petkovic in her match.

The Romanian world number two had difficulty coping with the serve of her opponent, who is ranked at number 17 by the WTA, and also lost her own serve nine times during the closely-fought match.

But after her hard-earned victory, the WTA said she had withdrawn from the tournament with a hip injury, and her scheduled opponent in the quarters, Ana Ivanovich, will go straight into the semi-finals.

The Serb, who is seeded ninth, defeated German Sabine Lisicki 6-3, 7-5 in her third round match.

Kerber is desperate for points as she is seeking a place at the WTA Finals in Singapore, the end-of-season finale involving the world's top eight women players.

Russian Ekaterina Makarova is another player whose hopes of making Singapore were potentially dashed, as the 12th seed in Beijing crashed out to Roberta Vinci 6-1, 0-6, 7-5.

The Italian will meet Petra Kvitova in her quarter final match, after the world number three made it through without having to play Thursday.

The much-anticipated duel between Kvitova and Venus Williams failed to happen when the American withdrew with a "viral illness".

Australian Samantha Stosur also made it through to the next round after claiming a 6-4, 6-2 victory over Alize Cornet of France.

The $5.4 million China Open will reach its climax on October 5.