STRASBOURG (FRANCE) - Sebastien Ogier returns to the roads of eastern France where he clinched his first world rallying title last year, determined to repeat the feat in the Rally of France this weekend. 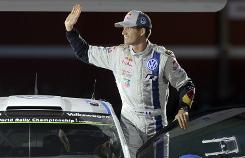 French driver Sebastien Ogier greets the public during the presentation ceremony of the Rally of France in Strasbourg on October 2, 2014

The Frenchman knows that only VW Polo teammate Jari-Matti Latvala of Finland can prevent him winning a second successive title.

And he aims to wrap it up with time to spare as there are only two races, in Spain and Britain, to follow.

Finishing six points clear of Latvala would see him crowned champion again. But a repeat of the problems he had in Germany, where he and Latvala both withdrew and failed to win a single point between them, would set up a tense finale to the season.

"A 50-point lead, that's quite good, but Germany is a reminder that I could quickly see it start to slip away," Ogier said. "I have to avoid a blank result as that could allow Jari-Matti to narrow the gap to 22 points."

Since being forced out of the race on Germany tarmac, Ogier has had the psychological boost of winning the Rally of Australia to stretch his lead over Latvala, who finished second.

Ogier and Latvala, who have already clinched the manufacturers' championship for Volkswagen, have dominated this year with the Frenchman winning six events and the Finn three.

"Last year, I only needed one more point," Ogier recalled. "This time, it's more complicated.

"I have to finish ahead of Jari-Matti but can't afford to take unnecessary risks. I always go out to win, but all the same the main thing is to stay on the road and too bad if it means waiting a few more weeks to take the title."

The race, held in and around the Alsace capital Strasbourg, starts on Friday with seven specials, continues through Saturday with a further seven and ends on Sunday afternoon after four more.