SOCHI (RUSSIA) - Formula One has learned lessons from Jules Bianchi’s life-threatening crash in Japan and will make key changes to improve safety, two of the sport’s leading figures said on Friday. 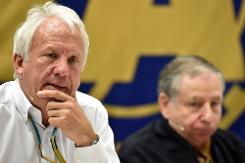 Jean Todt, president of the International Motoring Federation (FIA), and the ruling body’s race director Charlie Whiting made this clear during a briefing in the paddock late on Friday at the inaugural Russian Grand Prix.

The two also revealed more details of the terrible accident in which the 25-year-old Frenchman’s Marussia car crashed into a recovery vehicle at the conclusion of the rain-lashed Japanese Grand Prix at Suzuka last Sunday.

“We have to learn from what happened,” said Todt. “And we will, because we cannot be faced with such a situation again. Each life is very important."

Film of the two accidents involving Bianchi and Adrian Sutil, who aquaplaned off the circuit at the same Dunlop Curve one lap earlier, were shown.

The film showed Sutil run off the dry racing line, in heavy rain, causing his Sauber to spin off the track.

Bianchi appeared to do the same, but attempted to correct his slide and was pitched, nose-first, off the track into a collision with the heavy vehicle, carrying a crane in use to recover Sutil’s car.

In the collision, Bianchi suffered severe head injuries including a diffuse axonal injury to his brain.

Whiting, who is in the process of completing a full report of the accident, explained that the FIA wanted drivers to slow down more during such incidents.

“We put double waved yellows out because we felt that the incident could be dealt with -- without using a Safety Car," said Whiting.

“The next stage up is a Safety Car, of course, but because the car was well away from the track, against a tyre-barrier, that was the normal procedure for us to follow.”

He added that “not everybody slowed down” in response to the double waved yellow flags, but declined to reveal how fast Bianchi was driving.

“I don’t think we need to go into details about how much he slowed down relative to others, suffice to say we do have that data. He did slow down, but it’s a matter of degree.”

He said he had been in a meeting with drivers on Friday and would be meeting the teams on Saturday to discuss some “good, sound and well thought through ideas.”

He added: “One of the most important things to learn here is that it is probably better to take the decision to slow down away from the drivers.“

Explaining this, he said he planned to discuss with the teams a way of imposing a speed limit.

“It would have the same effect as a Safety Car because if you slowed everyone down to the same pace they would hold position."

Whiting also added that the FIA was considering fitting "skirts" to all recovery vehicles to ensure it was impossible cars to go beneath them, as Bianchi did.

Whiting also revealed that the FIA had suggested bringing forward the start time of the Japan race, but promoters Honda chose to keep it at 1500 local time.

“The race start time is entirely unconnected to the incidents in question,” said Whiting.

It was also explained at the briefing that Bianchi was transferred to hospital by road, and not air, because the helicopter ambulance could not land at the hospital at that time.

The road ambulance took 32 minutes to make the 15km journey and Medical Rescue Co-ordinator Ian Roberts said Bianchi "was monitored very closely and arrived at the hospital in exactly the same state physiologically.”

Whiting said that no changes were to be introduced at this weekend’s Russian Grand Prix but were being considered for use next season.