Amanda Carr, Charyl Chappuis and Sandy Stuvik are among a new generation of half-Thai athletes making an impact on the world stage

One was educated in the US but learned to cycle by dodging buffalo dung on the rice fields of Udon Thani. One played for Switzerland's under-17 national football team and has gone on to represent Thailand in the Asian Games. One raced go-karts in Phuket from the age of four and went on to become the first Thai national to win a Formula 3 championship race. 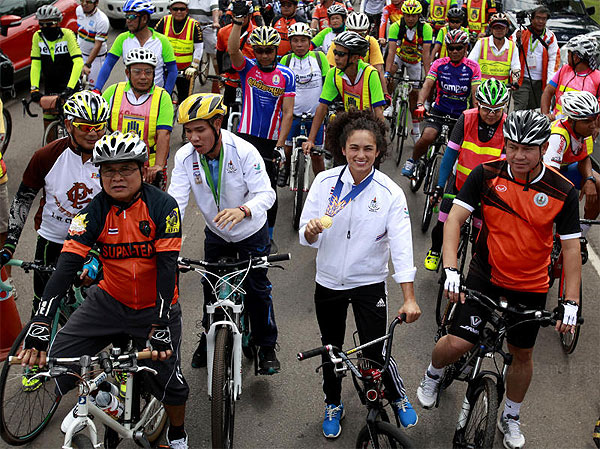 Cyclist Amanda Carr, footballer Charyl Chappuis and racing driver Sandy Stuvik are the leading lights among a wave of half-Thai, half-Western athletes who are taking on the world. Known as luk krueng, the multiracial athletes have quickly gained celebrity status — often backing up their good results with looks and manners that have captured fans' hearts.

On Wednesday, the northeastern province of Udon Thani was in a festive mood when locals welcomed their heroine Carr. People were anxiously waiting for the arrival of Carr, the Thai-American cyclist who became an overnight sensation when she triumphed in the women’s BMX event to snatch an Asian Games gold medal for Thailand on Oct 1.

With her naturally curly hair, Carr looks every bit a Westerner. But Carr has strong links to Isan, and has endeared herself by always greeting Thai fans in the northeastern dialect and finishing sentences with “ja”.

Chappuis was another sensation of the Asian Games. The 22-year-old half-Thai, half-Swiss football player drew a massive crowd. And even though the team came away empty-handed, his popularity was undiminished. Thai Rath, the country's largest daily newspaper, even has a web page devoted to photographs of Chappuis in different poses, including one showing his bare chest.

But not all luk krueng athletes are instant stars. 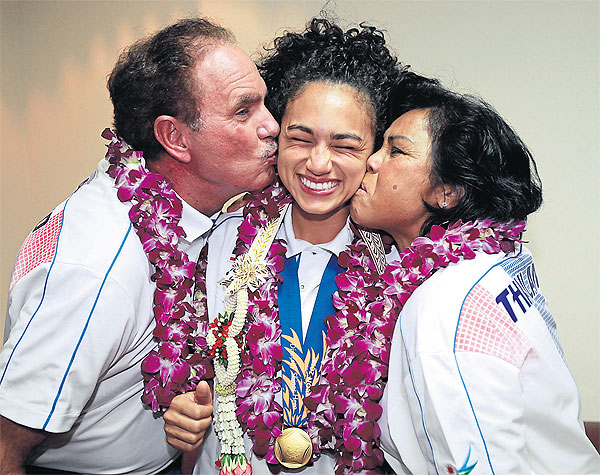 “It takes their manner on and off the field to win the hearts of Thai fans,” said Lt Gen Decha Hemkasri, the Thai Cycling Association secretary and Asian Cycling Federation vice-president. “They have to impress Thai people by identifying themselves as Thai.”

Lt Gen Decha said Carr, for example, often referred to her mother's heritage. “She always said her mother is from Udon Thani and she has absorbed the Thai culture.”

He added that every time people asked Carr to stop for a chat or a photo, she would always smile and wai in return, impressing those who met her.

Chappuis’ mother, Pailin, told the Thai press earlier this year that her son's familiarisation with Thai culture contributed to his smooth transition to the Thai football team. Chappuis’ Thai language proficiency is still elementary, but he often spent time in his mother's land when he was young and feels a strong connection to the country. Ms Pailin said after Chuppuis told her of his selection, “I was proud that my son had an opportunity serve Thailand.”

Chappuis has been playing in Thailand’s premier league for a while. He played for Buriram United last year until he was transferred to Suphan Buri. Before representing Thailand, Chappuis played for Switzerland's under-17 national team.

“Before he decided to play for Buriram United earlier this year, he just asked me what the Thai football scene was like," Ms Pailin said. "I didn't think he would have any problem adjusting because he came to visit Thailand many times.” 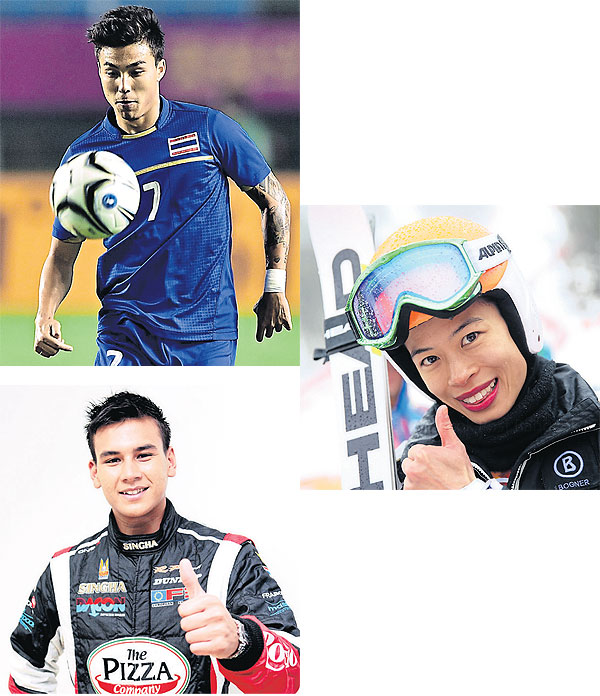 As sport has become an increasingly profitable profession, a diverse number of people have been attracted to the local sport scene. The result is that Thailand is now more competitive in more fields — in the past, boxing was virtually the only sport Thai athletes could excel in internationally. The Thai fighters were mostly from rural areas and were typically young men aspiring to box their way out of poverty.

In the past two decades, the success of Tammy Tanasugarn opened the door for tennis, while the Thai premier league means young footballers with talent can earn a good salary.

Increasing support from sponsors, both the public and private sectors, also gives athletes more choice and has led to greater success at international events.

In recent years, Thai gold medal hauls have expanded from boxing to other sports such as taekwondo, weightlifting, tennis and cycling. Many aspiring mixed-race athletes are also finding it more attractive to play under the Thai flag.

In February, Vanessa-Mae, the violinist born in Singapore to Thai and Chinese parents, was Thailand's second winter Olympian. Representing the country under her father’s surname Varakorn at Sochi, her Olympic campaign did little to excite fans because most think of Vanessa-Mae as a British-based violinist rather than a Thai athlete. Vanessa-Mae was also the last of those who finished the giant slalom, some 50 seconds behind the winner.

Carr said that she chose to ride for Thailand because it would be tougher for her to compete under the American flag as it was fiercely competitive. In the US, there were only a couple of cyclists whose rankings were higher than Carr's.

But once she decided to compete for Thailand, she could easily blend in with the Thai team, thanks largely to the cultural influence from her mother's side.

Lt Gen Decha said he invited Carr to join the team after she visited Thai athletes during the 2012 London Olympics. Carr got along well with the team and even joined them for a som tam meal after a training session. "I asked her if she wanted to ride for Thailand. She said she had to go back and ask her parents. Carr later responded that her parents would be pleased to see her ride for Thailand," Lt Gen Decha recalled.

It took two years for Carr to settle her citizenship and be qualified to ride for the country, but the effort paid off. She won Asian Games gold and her next target is to qualify for the Rio Olympics in 2016.

Carr said she is used to a cross-culture environment. “My father [who previously served in the US military] taught me to be tough. But my mum was softer. I always speak Thai to my mum.”

Ms Pailin also said she raised Chappuis by mixing Thai and Western cultures, in addition to sports. “It helps create a disciplinary habit for my son.”

Being a luk krueng can have physical advantages. Lt Gen Decha said Carr's tall stature works to her advantage in BMX races. Swiss-born Chappuis is 180cm tall, where Thai men average closer to 170cm, and this can be an advantage to the midfielder.

Plus, it doesn't hurt that some luk krueng athletes have exotic looks that appeal to a mass audience. Stuvik, the 19-year-old Thai-Norwegian racing driver who currently tops the leader board in this year's F3 series, drew the attention of female fans partly due to his movie-star looks.

At any rate, the hype over luk krueng athletes can sometimes overshadow the achievement of others. In fact, Carr’s gold should not have been as much of a surprise as Jutathip Maneephan's, who took home an unexpected gold in the women's cycling road race at Incheon. But celebration for her seems to be muted compared to the high profile parades Carr received.

Asked if overwhelming attention on Carr would offend other athletes, Lt Gen Decha said: “Absolutely not. These players always go out together as a team. Jutathip and Amanda are good friends. In fact, Jutathip and other players are happy with Carr’s success because it adds more medals for Thailand.” n