I was treated badly, grumbles Buakaw

Muay Thai star Buakaw Banchamek claimed yesterday he left the ring before the end of Saturday's fight because he had been treated badly. 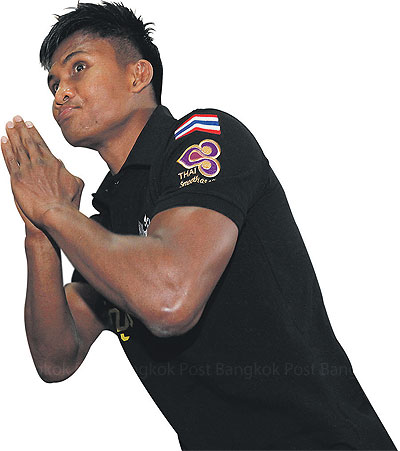 Buakaw's bout against Germany's Enriko Kehl in the 70kg division of the K-1 World Max Final in Pattaya ended in a draw after three rounds.

According to the rules, a fourth round was needed to determine the winner, but Buakaw and his team left the venue at the end of the third and final round.

Kehl was declared the winner in Buakaw's absence.

"I wanted to protect the reputation of muay Thai," Buakaw told a press conference at his Banchamek Gym yesterday.

The 31-year-old claimed there were changes to the rules which put him at a disadvantage, and he thought he won the contest.

"I am sure the fans also thought I won," said Buakaw, a two-time K-1 Max champion.

"I decided before the fight that I would leave the venue immediately after three rounds because I was not happy with the change to the rules.

"It was my own decision. This had nothing to do with my manager or my corner men.

"I hope my supporters and everybody else understand me."

Buakaw had earlier claimed online betting might have influenced the outcome.

But when pressed by reporters, he refused to discuss the matter.

He said he would continue fighting in K-1 because he is under contract with K-1 Global Holdings, the worldwide organiser of the sport.

"I will honour my contract which expires at the end of next year but we need to discuss details."

Ned Kuruc, of K-1 Global Holdings, said that he was willing to hold talks with Buakaw to discuss his contract.

"I don't want to make any accusations against Buakaw," he said.

"We need information from him. Buakaw is still regarded as a K-1 legend and we need time to talk."

However, he has been involved in several controversies over the years.

Two years ago, he had problems with his handlers at Por Pramuk boxing camp which had supported him since he was a child.

He also had issues with Thai Fight organisers and no longer takes part in their tournaments.

Hamilton in dreamland after record-breaking triumph