AUSTIN - Frenchman Jean-Eric Vergne lost his ninth place in Sunday’s United States Grand Prix when he was penalised afterwards for his collision with compatriot Romain Grosjean. 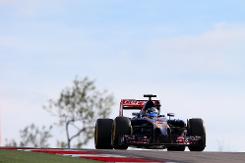 Jean-Eric Vergne of France and Scuderia Toro Rosso drives during the United States Formula One Grand Prix at Circuit of The Americas on November 2, 2014 in Austin, US

In a busy evening, the stewards also handed out a seven-place grid penalty to Mexican Sergio Perez of Force India for his first lap collision with German Adrian Sutil’s Sauber.

Luckless Vergne, who is searching for a drive for next season, was unable to stop his Toro Rosso car making contact with Grosjean’s Lotus in the closing stages of the race when he locked up his brakes during a passing move at Turn One.

Officials gave Vergne a five-second penalty for forcing Grosjean's Lotus off the circuit in the collision.

Grosjean ultimately finished 11th and he said: "Jean-Eric came into Turn One and bumped into me, broke my front wing and my floor and I couldn't really recover.

"I was on the radio saying 'guys, that's not fair, he [should] get something', because I could have got P8. I may not get my points and position, but it's good that Pastor scored and we were finally able to fight with Ferrari and Toro Rosso."

Vergne said he felt he had to take a risk in trying to pass Grosjean. “I had to do something, I was not going to stay sitting behind waiting. I saw the opportunity and I went for it. He closed the door but it was too late."

Perez will take a seven-place grid penalty into the Brazilian race after the stewards found him guilty of reckless driving.

He collided with the Sauber of Adrian Sutil on the opening lap of Sunday's race at Austin, putting both out of the event and causing the introduction of the Safety Car.

Perez was given a seven-place grid penalty and two penalty points on his licence for causing the collision.

Perez said the crash, in which he also made lighter contact with Kimi Raikkonen's Ferrari, was "unfortunate".

He said: “I made a move on Adrian at turn 15 when he left the door open, so I went up the inside, then Adrian started to close the door and I had to try and brake later than him.

“By doing so, I was unable to avoid contact with Kimi, which caused me to make contact with Adrian also. I just didn't expect Kimi to be in that position."