MEXICO CITY - Christina Kim snapped one of the longest winless droughts on the LPGA Tour with a wire-to-wire victory at the Lorena Ochoa Invitational on Sunday. 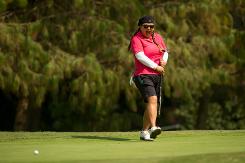 Christina Kim of the United States reacts to a missed eagle putt at the second hole during the fourth round of the 2014 Lorena Ochoa Invitational on November 16, 2014 in Mexico City

The 30-year-old American claimed her first victory in almost a decade as she made a par on the second playoff hole to beat China's Feng Shanshan at the Club de Mexico Golf course.

Feng used four birdies on the back nine to catch Kim. But after both players made par at the first playoff hole, Feng stumbled to a bogey on the second playoff hole, giving Kim her first title since the 2005 Tournament of Champions.

The next closest golfer was world number one Park In-bee, who shot a four-under 68 to finish alone in third at 11-under 277. Brittany Lincicome (69) and Ryu So-Yeon (71) ended tied for fourth at nine-under 279.