Mark Sanchez threw for one touchdown and ran for another and the Philadelphia Eagles seized sole possession of first place with a 33-10 rout of the Dallas Cowboys. 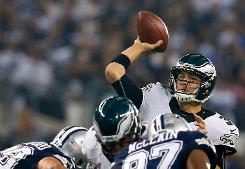 Mark Sanchez of the Philadelphia Eagles passes against the Dallas Cowboys in the first half, at AT&T Stadium in Arlington, Texas, on November 27, 2014

The Eagles on Thursday raced out to a 14-0 first quarter lead and never looked back on their way to improving to 6-0 overall on the US Thanksgiving holiday.

"We are really in a good spot. We want to cherish this, but we can't get complacent," said Sanchez, who had 217 yards on 20-of-29 passing for the Eagles.

In the other Thanksgiving Day games, the defending Super Bowl champion Seattle Seahawks stomped the San Francisco 49ers 19-3 in a rematch of last year's NFL conference championship game and Joique Bell and Calvin Johnson each scored twice as the Detroit Lions crushed the Chicago Bears 34-17.

Sanchez's precision passing and a superb defensive effort allowed the Eagles to improve to 9-3 on the season. They now lead the second place Cowboys (8-4) in the race for top spot in the NFC Eastern Division.

"Nobody gave us a chance today," said running back LeSean McCoy. "We been criticized all year, especially myself.

"It doesn't matter what anybody says, it matters what goes on in our dressing room. We believe in each other."

McCoy credited his offensive line with helping him rush for 159 yards and a touchdown on 25 carries.

"I got my bodyguards and they did a great job today," he said.

Russell Wilson completed 15-of-22 passes for 236 yards and a touchdown pass, Marshawn Lynch ran for 104 yards on 20 carries and Steven Hauschka kicked five field goals for the Seahawks, who have won five of their last six games.

Kaepernick threw for 121 yards on 16-of-29 passing as the 49ers saw their three-game winning streak snapped.

Lions quarterback Matthew Stafford was 34-for-45 for 390 yards with two touchdown passes for the Lions, who rebounded from a pair of road losses to Arizona and New England by breezing past the Bears Thursday.

"We had shown that we could do it in spurts at times this season," Stafford said of his offence. "To put it together for 60 minutes was gratifying."

Bell totaled 91 yards on 23 carries, while Johnson had 11 catches for 146 yards for Detroit, who have won their last two Thanksgiving Day games thanks to a triumph over Green Bay last year.

Quarterback Jay Cutler was 31-for-48 for 280 yards with a pair of touchdown passes along with two interceptions for the Bears, who had won their previous two games heading into the contest.

Johnson made a nine-yard catch in the first half, moving him over 10,000 receiving yards for his career. He reached the milestone in an NFL-record 115 games, one fewer than Torry Holt.

The victory moves Detroit a half-game back of Green Bay for first place in the NFC Northern Division.

The Packers host the New England Patriots in a potential Super Bowl preview at Lambeau Field that highlights a slate of 12 games on Sunday.