ALMATY (KAZAKHSTAN) - Inspired by the success of neighbours Russia in staging the Olympics in the southern resort city of Sochi, Kazakhstan has set its sights on hosting the 2022 Winter Games in its former capital of Almaty. 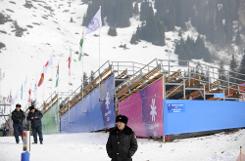 A Kazakh policeman at the Shymbulak Alpine Resort in Almaty during the Asian Winter Games on January 30, 2011

"We will seriously boost the country's image if we win the right to stage the Olympics," the mayor of Almaty, Akhmetzhan Yessimov said recently.

"We will prove that Kazakhstan is a powerful country which is capable of staging the world's biggest sports events. This is very important for such a young country as Kazakhstan."

Kazakhstan, which is mostly known to the Western public through the British-American mockumentary "Borat: Cultural Learnings of America for Make Benefit Glorious Nation of Kazakhstan", currently looks like the favourite in the race for the right to host the Games.

Almaty, formerly known as Alma-Ata, is the biggest megapolis in the Central Asian country. Astana replaced it as capital in 1997 and Almaty is now known as Kazakhstan's southern capital.

With a population of 1.6 million people, it was the first city to place a bid in August 2013 for staging the world's winter sports extravaganza.

An impressive set of bidders including Oslo, Stockholm, Barcelona, Helsinki, Munich and others joined Almaty in bidding to host the Games but many later dropped out from the race, leaving Almaty head-to-head with Beijing.

Supporters of the idea of Almaty's hosting the Olympics -- including 90 percent of its population -- have expressed confidence that they have an advantage over Beijing, which has already staged the Summer Games in 2008.

But some of Kazakhstan's sports chiefs are far less optimistic both about the city's chances for the win and the country's ability to stage the Olympics without serious damage to the state budget.

"It's too early to celebrate as Beijing is a serious competitor," Nail Nurov, the director of Astana's ice palace, told the press.

"We have a chance to win the right to hold the Games. It's not a miracle. But taking into consideration what the Russians have done in Sochi, it may become a serious problem for Kazakhstan in general."

Nurov added that after Russia had invested more than $50 billion (40.1 billion euros) into holding the 2014 Olympics, the staging of the Games had become a problem for all of the future contenders.

"This is a clear message to the IOC: the world doesn't want to spend huge money on staging the Olympics any more. The IOC should stop their encouragement of these vanity races," Nurov added.

Meanwhile, IOC chief Thomas Bach, who visited Almaty in October, expressed his satisfaction at the city's existing facilities and its plans to prepare for hosting of major events in the future.

"With all these facilities and the city's rich sporting traditions, Almaty's candidacy looks possible and solid."

In 2011 Almaty, together with Astana, successfully hosted the Asian Winter Games.

A completely new ski and biathlon centre and a ski jumping complex were built for the event in the suburbs of Almaty, while the alpine skiing range Shymboulak and speed skating ice rink Medeo were completely renovated.

The staging of the Asian Games was found to be a success and in the same year Almaty won the right to host the 2017 Winter Universiade student games.

Almaty's concept for hosting the 2022 Olympics calls for the events to be staged in two sporting centres within the city limits and in the mountain cluster venues, which are situated 35-kilometres away.

A city hall report said that seven venues were ready to stage top-class sport events, while three arenas were currently under construction for the student games.

That means Almaty will only have to build a couple of sporting facilities and to construct infrastructure for the Olympic Park (the Olympic Village, hotels for IOC members, a media centre and a TV broadcasting centre) to be ready for hosting the Olympics.

The level of Almaty's readiness will be tested when the IOC evaluation commission, headed by Russia's Olympic Committee chief Alexander Zhukov, is set to visit next February.

The host city of the 2022 Winter Olympics will be announced on July 31, 2015, in Kuala Lumpur, Malaysia, at an IOC congress.

KUALA LUMPUR: Malaysia has detected its first case of the Omicron coronavirus variant in a foreign student who was quarantined after arrival from South Africa two weeks ago, its health minister said on Friday.