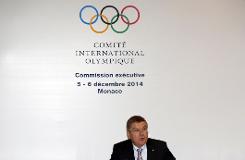 Thomas Bach, pictured in Monaco on Friday, says the International Olympic Committee will impose a "zero tolerance" punishment if accusations of widespread doping by Russian athletes are proven

"What is important for the IOC is that we take these allegations seriously," Bach told a news conference when asked about the doping claims made in a German television documentary.

He said the IOC had written to the International Association of Athletics Federations (IAAF) ethics commission demanding "to be informed about all the results which may affect people and the jurisdiction of the IOC."

"If such allegations should be proven by the IAAF ethics commission then the IOC will react with its zero tolerance policy," Bach vowed.

Russian officials have strongly denied the claims of state-backed doping made in the documentary. The Russian athletics federation has said it is considering legal action.

The IOC has already called for a speedy investigation into the claims.

The documentary featured accusations by 800m runner Yulia Stepanova, who is banned until January for a doping violation, and her husband Vitaly Stepanov, who worked for Russia's anti-doping agency between 2008 and 2011. Stepanova secretly filmed a coach offering her banned steroids.

Bach said that within "hours" of the documentary being shown, the IOC and the World Anti-Doping Agency (WADA) had contacted the IAAF.

"We have been told that both WADA and IAAF have provided all the documentation that they have to the IAAF ethics commission," Bach said.

"Given the seriousness of the allegations the responsibility of the IOC is also to respect the right of every person to defend him or herself and we will not try to interfere nor comment on the procedure," he added.

Nagelsmann out with Covid-19, but Bayern hope for a home full house