Tiger happy with progress but lots of work to do
Sports

Tiger happy with progress but lots of work to do

Tiger Woods was pleased to swing powerfully and without pain in his comeback event, but the former world number one finished the Hero World Challenge with plenty of work ahead. 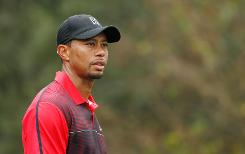 Tiger Woods walks off the third tee during the final round of the Hero World Challenge on December 7, 2014 in Windermere, Florida

Woods, who ended a four-month back injury layoff at the event, fired a par 72 Sunday at Isleworth to complete 72 holes on level par 288, sharing last with Hunter Mahan in the 18-golfer field.

"It feels good to feel that rush again," Woods said. "I didn't hit the ball as well as I would like. My short game was awful. But I was able to play for four days and hit the ball the way I wanted to and that's progress.

"It's so nice to hit drives that hard again, take bunkers out of play, cut corners, hadn't felt healthy enough to do that in a very long time."

After battling illness for two days, stumbling to five-over in his first eight holes and displaying woeful chip shots thrown off by swing changes, Woods found the positives in simply playing without pain, rare for him in 2014.

"I made some progress," Woods said. "I hadn't played in four months. I was able to play without any issues and that really reinforces that I'm doing the right thing for my body.

"It's nice to be able to go out and hit driver that hard again. I've gotten my speed back. Look how far I'm hitting it now. That's nice.

"I obviously need to clean up my short game. That still needs a lot of work. To come out and not play in any kind of pain and hit the ball as hard as I want without really flinching is great progress."

Jordan Spieth, coming off an Australian Open win last week, fired a 66 to finish a wire-to-wire Challenge victory by 10 strokes over world number two Henrik Stenson, his 26-under 262 dominating the field much the way Woods did in his heyday.

Woods, who had not played since the PGA Championship in August, said he planned to build upon his solid start in a four-month plan to peak for the Masters, happy his body was healthy enough for full-power practices.

"If I stay the course I'm on now, I'll eventually be able to do what I want to do," Woods said.

Woods, ranked 24th, would like to challenge Rory McIlroy at Augusta National in April as the current world number one tries to win his third consecutive major and complete a career grand slam.

"I've been hurt. I've been out of it for a long time. I've had to make my run to get back there," Woods said.

"It takes winning... it's a process to get back to that level. You've got to build up to it. I've got some time."

The 14-time major champion, chasing the record 18 majors won by Jack Nicklaus, says he will practice one more week, take a holiday break, and return to work in January.

"I like what I'm doing right now," Woods said. "I just want to reinforce it before I take my break. There are some things I can do with my short game I can definitely work on."

Woods gave no hint about his early 2015 tournament plans, with past years having included stops at Torrey Pines, Doral and Bay Hill in the run-up to the Masters in April.

"It's a pretty full schedule," Woods said. "I'll leave it at that."

Woods, who has not won a major since the 2008 US Open, turns 39 later this month and no player has won four majors beyond that birthday.

On Sunday, Woods opened with six pars before a tap-in birdie at the par-5 seventh and sank a 10-foot birdie putt to finish his front nine at two-under.

But Woods' chipping woes cost him dearly at the par-5 13th, where he needed three tries to pitch the ball onto the green on his way to a triple bogey.