BERLIN - The whistleblowers who made serious allegations of doping in Russian athletics insist they have more proof to back-up their accusations and are waiting to hear from the IAAF and WADA. 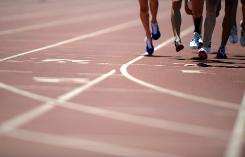 Russian 800m runner Yulia Stepanova, who is banned until January for a doping violation, and her husband Vitaly Stepanov, who worked for Russian Anti-Doping agency RUSADA between 2008 and 2011, accused the IAAF and RUSADA of knowingly covering up failed doping tests in a German documentary earlier this month.

The World Anti-Doping Agency (WADA) has appointed a independent commission to investigate and RUSADA has also launched it's own inquiry.

The couple quit Russia before the ARD documentary, in which they paint a bleak picture of widespread doping in Russian athletics, was aired and in two separate newspaper interviews claim to have more proof.

"'These are all lies', Valentin Balakhnichev has said, while the federation wants to sue us, but we have evidence, much more than German television showed," Stepanova told Frankfurt newspaper FAZ.

"We hope someone from the IAAF or WADA will get in touch to see the material, but so far that hasn't happened."

Stepanov says the couple made the right decision to leave Russia.

"It turned out to be a good decision as the reaction there has been quite negative," he told Munich-based newspaper Sueddeutsche Zeitung.

"We have been branded as liars, and in most cases 'bad Russians', in the media and that we'll have big problems if we return.

"We will probably be sued by the Russian Athletics Federation although we have proof to back up our statements."

Stepanova admits she used banned blood-booster EPO and reveals why she wanted to lift the lid on doping in Russia.

"In Russia, (doping) is called 'the cocktail'-- it contains various substances, EPO for endurance sports and steroids for power," she said.

"I was banned for having an abnormal blood reading, I took EPO and I admitted that in a letter to WADA almost two years ago.

"I explained how Russia's national team coach provided me with EPO and how the Russian federation's chief of the medical commission guided me towards doping.

"My husband and I want to bring the truth into the light.

"In Russia, they say rules are made to be broken and many live like that.

"There are rules and then there is real life."

Stepanova says anyone involved in doping in Russia should be banned for life.

"Officials who support doping instead of fighting it should be kicked out," she insisted.

"Since most of the coaches come from the former Soviet Union, it would be impossible for them to change their ways.

"If you really want to fight doping, you can't ban officials like coaches for two or four years, but for life.

"The (sports) ministry needs to bring in young coaches from abroad and give them time to build a system which works without doping.

"The entire federation should be banned from all international competitions for two years."