NAIROBI - Disgraced Kenyan drugs cheat Rita Jeptoo appeared before a disciplinary hearing on Thursday, although officials said a decision on her suspension from distance running would be delayed pending further investigations. 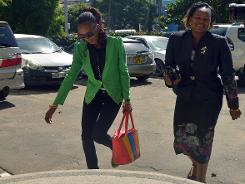 Disgraced Kenyan marathoner Rita Jeptoo (L) arrives on January 15, 2015 at the Athletics Kenya headquarters in Nairobi with her lawyer

Jeptoo, once considered the world's top female marathoner, was busted for using the banned blood-boosting hormone EPO during an out-of-competition drugs test last year, and faces a ban of at least two years plus the loss of a string of recent titles.

Athletics Kenya officials, who had urged Jeptoo to "spill the beans" on how she acquired and was administered the drug, said the athlete testified for more than two hours in what was a "very productive hearing".

"We have garnered a lot of information," Athletics Kenya medical commission member and chief executive Isaac Mwangi told reporters at the end of 12 hours of closed-door testimonies and deliberations.

"This case has not been concluded simply because there is a lot of information that has come about through the hearing and we have to go back and consult," he said, adding that Jeptoo remained on suspension pending a final decision.

He also said Athletics Kenya needed to consult with the International Association of Athletics Federation (IAAF) on whether Jeptoo should be punished with a two-year ban or with the new mandatory four-year ban that came into force from January 1.

Another hearing will take place in two weeks, he added.

Jeptoo is the biggest name in Kenyan athletics to have been caught cheating, and the scandal has cast a shadow over the astonishing achievements of the east African distance running powerhouse.

The athlete, aged 33 and the winner of the last two consecutive Boston and Chicago marathons, kept her eyes to the ground and made no comment to reporters as she entered and exited the Athletics Kenya headquarters -- maintaining her public silence over the scandal.

Jeptoo's manager Federico Rosa and coach Claudio Berardelli, both of whom have distanced themselves from the athlete, also appeared before the hearing.

Her estranged husband Noah Busienei -- who has implicated Jeptoo in doping offences dating back to 2011 -- was also called to testify.

Kenya's sports bosses have been accused of inaction on the doping issue, which has cast a shadow over the record-breaking and medal-winning achievements of its fabled distance runners.

They have blamed the current crisis on dishonest foreign agents and managers who are "corrupting" Kenyan runners.

Overseas fans likely to be barred from Tokyo Games