TOKYO - Doping in sport is a public health issue, the head of the World Anti-Doping Agency (WADA) said Wednesday, because of the spread of substance abuse from elite athletes to school gyms. 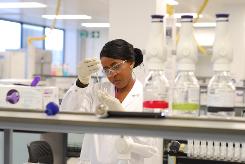 An analyst handles samples in a British anti-doping laboratory ahead of the London 2012 Olympic Games, on January 19, 2012, in a photo obtained from organising committee LOCOG

"Too many people are taking too many substances they don't even know," WADA director general David Howman told AFP in an interview in Tokyo.

"Where have they come from? They are not sanitised, they could be very dangerous."

Howman was speaking days after cycling cheat Lance Armstrong said he would take banned substances again if faced with the same circumstances that saw him dope in 1995.

"If you take me back to 1995, when doping was completely pervasive, I would probably do it again."

Howman was in Tokyo for a conference involving sports bodies and the pharmaceutical industry on how to stamp out drug cheating. He said young people were doping.

"Sometimes children -- and I'm not suggesting Japanese children but I certainly know in North America -- have taken drugs that their parents don't know they're taking," he said.

While WADA has been trying to address the issue, "it's not our job because sometimes it's not elite athletes," he said.

"As a society we would be shocked at the amount of stuff that our children are taking.

"We think this is a public health issue and we are supported by the World Health Organisation and by many others who now see it's not just a sport issue."

A string of doping scandals came to light in Russia after a 60-minute documentary "Secret Doping Dossier: How Russia produces its Winners" was aired last month by German state broadcaster ADR.

WADA set up an independent team to investigate the allegations, but the probe could take months, Howman said.

"We know that it's not just athletes who are the cheaters; we know that they can be coaches and trainers and lawyers and doctors and physiotherapists, a lot of people," he said.

"We've been saying it's not just the athlete that's the cheat. It's the entourage," he said.

Somyot sets sights on spots at World Cup and Olympics