The coaches of Mali and Guinea Wednesday criticised drawing lots to decide which country reaches the Africa Cup of Nations quarter-finals. 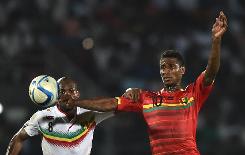 A 1-1 draw in Mongomo between the west African countries left them joint runners-up behind Ivory Coast in Group D, level on points, goal difference and goals scored.

Who advances to face Ghana in the quarter-finals will be decided Thursday at 1500 GMT by drawing lots in a Malabo hotel.

Two balls, with the name of one team inside each, will be placed in a pot.

An African Football Confederation (CAF) official will then pick one ball from the pot and the team inside it secures a last-eight place.

Mali coach Henryk Kasperczak said: "You have to respect the rules, we have no choice. We are going to be nervous, Guinea also. We must find a more sporting way, fairer," he said.

"We have to solve the problems of qualification ... without a drawing of lots. This does not correspond to a sporting spirit."

Guinea coach Michel Dussuyer said: "I would be disappointed but it's hard for any team. No one deserves to be eliminated.

"Mali didn't lose a game -- they played very well in the tournament. They do not deserve to be eliminated in this way, just as we do not."

Drawing lots was last needed at the Cup of Nations in 1988 with Algeria progressing to the knockout stage at the expense of Ivory Coast in Morocco.

Mali benched Sambou Yatabare and Bakary Sako -- the scorers in draws with Cameroon and Ivory Coast -- for the match at a packed Estadio de Mongomo in eastern Equatorial Guinea.

The Eagles were quickly into their stride with Abdoulaye Diaby firing just over 65 seconds after the kick-off and the same player had a close-range effort deflected for a corner not long after.

But while the pacey Malians were troubling the Guineans, the Syli Nationale (national elephant) took the lead on 15 minutes from a Constant penalty.

The Tunisian referee initially waved play on when an Ibrahima Traore shot struck the arm of Salif Coulibaly, but changed his mind after hearing from his assistant.

Former AC Milan midfielder Constant was ultra-cool in the 25-degree (77 fahrenheit) heat as he stroked the ball into the middle of the net after Germain Berthe dived left.

Just three minutes later Mali had a great chance to equalise only for talisman and former Barcelona midfielder Keita to fluff his penalty.

Baissama Sankoh handled a fierce cross from Modibo Maiga and Keita slotted the spot-kick timidly into the arms of goalkeeper Naby Yattara.

It was a rare dark moment for 35-year-old AS Roma attacker Keita, who played pivotal roles in his country finishing third at the last two Cup of Nations tournaments.

"Seydou, Seydou, Seydou," was the encouraging chant of the large section of the crowd at the 15,000-seat stadium backing the Malians.

Quicksilver Diaby was a continuous threat and Yattara did well to tip his sizzling shot over the crossbar for a corner.

Diaby burst down the right and his cross drifted over a Guinean defender, leaving Maiga to nod past Yattara from point-blank range at the far post.

Guinea were under continual pressure and suffered a major blow just past the hour when inspirational Traore was forced to retire injured with Seydouba Soumah coming on and Constant taking over as captain.