ORLANDO - Stacy Lewis, Jessica Korda and Azahara Munoz carded matching, six-under 66s in Wednesday's first round of the season-opening LPGA Tour's Coates Golf Championship, which was suspended due to darkness. 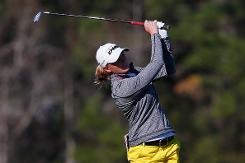 Stacy Lewis during the first round of the LPGA Tour's Coates Golf Championship on January 28, 2015 in Ocala, Florida

There were 21 players still on the course when play was halted at the Golden Ocala Golf course.

Lewis, the number three player in the world, has won 11 times on the LPGA Tour, including three victories last season.

"I just stayed patient out there. Finally on the back nine I kind of got more comfortable and started hitting golf shots," Lewis said.

"Had a couple birdies that were just tap-ins, which helped, and rolled a few putts in so it was a good day. I almost wish we didn't have darkness and could keep going, I finally got into a rhythm there."

Korda, a three-time winner on tour, won twice last year at the season-opening Pure Silk-Bahamas LPGA Classic and the Airbus LPGA Classic. Munoz has one victory at the 2012 Sybase Match Play Championship.

Austin Ernst and Jang Ha Na finished up in the morning groups at five-under 67. They held the lead throughout most of the day until Lewis, Korda and Munoz chased them down.

World number two Lydia Ko finished her first round tied for sixth at four-under 68 with Choi Na-Yeon. Lexi Thompson and Hur Mi-Jung are one shot further back at three-under 69. Ko was superb in her rookie season last year winning three times.

World number one Park In-bee carded a one-under 71 and she is tied for 15th with 11 others.

Lewis was the last of the leaders to finish her round, but she did so in style and she vaulted into a share of the lead.

Korda said she has the same good feeling this week that she had when she won the first tournament of the 2014 season.

"I just feel like I'm refreshed and ready to go," she said. "I try and bring the mentality with me all the time every time I try and play, but for some reason it shines brighter the first event of the season.

"I honestly don't know what it is about it, but I'm just happy to be back."