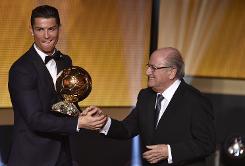 "Today (Thursday) is a key date in the electoral calendar. I've made my submission, now the electoral committee follow a process," the 78-year-old Swiss wrote on his Twitter account.

The deadline for nominees to announce their candidacies falls at midnight on Thursday.

Blatter, who has held the post since 1998, had already indicated his intention to seek another term, and has wide support in Asia, Africa and Oceania.

"It's very difficult to beat Blatter, I know, but I think the world of football is with me," said Ginola, 47, who is being paid pound sterling250,000 by betting company Paddy Power to throw his hat into the ring.

"It can't be that football is the most popular sport, but the most inaccessible politically speaking," Ginola told Spanish sports daily Marca.

Candidates must have played an active role in football administration for two of the past five years and be publicly nominated by five of FIFA's 209 member associations.

Blatter's reign has been tarnished by accusations of corruption stemming from the bidding process for the 2018 and 2022 World Cups, which were awarded to Russia and Qatar respectively.

Although the deadline is on Thursday, FIFA official Domenico Scala said it could take time before the names of the candidates are revealed.

"We cannot make a statement at the time of the date limit," said Scala, president of FIFA's Audit and Compliance Committee.

"A certain time will be needed before the ad hoc electoral commission are in a position to announce the candidates."

The election will take place in Zurich on May 29.

TAIPEI: Taiwan on Wednesday rebuffed a complaint from the Philippines about live fire drills around a Taiwan-controlled island deep in the South China Sea, saying it had the right to do so and always issues a warning of its exercises.

NEW YORK: Two days after Rudy Giuliani claimed a worker had assaulted him at a Staten Island supermarket, the once-vaunted former mayor was spending Tuesday morning like many men his age: complaining about his aches and pains.

Flecked with sewage, a prisoner grapples with an overflowing bucket as he and his fellow inmates clean Bangkok's congested drains for the first time in two years.

MLB suspends 12 for roles in Angels brawl with Mariners