CANBERRA - The West Indies believe they have turned the corner as they prepare to face Zimbabwe in a pivotal Pool B World Cup match at Canberra's Manuka Oval on Tuesday. 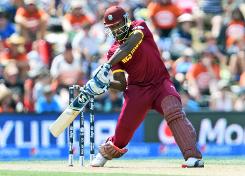 West Indies batsman Andre Russell hits out against the Pakistan bowling during their Cricket World Cup match in Christchurch on February 21, 2015

The West Indians celebrated their first victory of the tournament with a thumping 150-run win over Pakistan in Christchurch on Saturday following their shock first-up loss to Ireland.

Tuesday's match is set up nicely after Zimbabwe also posted their first points with a four-wicket triumph against the United Arab Emirates at Nelson on Thursday.

West Indies will start favourites to beat the Zimbabweans after winning 34 of their previous 44 one-day international encounters against the Africans, but, as Ireland showed, upsets are possible.

The Caribbean cricketers were criticised heavily after their lethargic loss to Ireland, but all-rounder Andre Russell believes his team now have momentum.

"It's a very good feeling winning a game after losing to Ireland, in that manner," said Russell, man-of-the-match against Pakistan with an unbeaten 42 and three for 33.

"It just goes to show that the West Indies can dominate and we are here to compete.

"On the day we have to turn up. It doesn't matter which team we play against, we're going to have to play our A game.

"It's all good cricket from now on. It's the momentum, and once we keep doing what we can do, I think we're going to go all the way."

However, the form of West Indies opener Chris Gayle continues to be a concern.

He was out for four against Pakistan and his average has dropped to 14.42 over 19 innings in the 20 months since his last century.

"Chris has been struggling, and we're still scoring 300," Russell said of one of the most destructive openers in the shortened format.

"I just think when Gayle and Marlon Samuels peak at the right time, West Indies has the ability to score over 350."

All-rounder Dwayne Bravo has been officially ruled out of Zimbabwe clash after pulling his left hamstring in the Pakistan match.

Zimbabwe captain Elton Chigumbura said his team has targeted victory over the West Indies after breathing new life into their World Cup campaign with victory over UAE.

After losing their opener to South Africa, Zimbabwe allowed the UAE to carve out the Middle East nation's highest ODI score of 285 before claiming victory with 12 balls to spare.

"We need to take this momentum into the game against the West Indies," said Chigumbura.

"Hopefully we can polish up our fielding and have a good game in all departments."

Sean Williams, who was Zimbabwe's hero with an undefeated 76 batting at five against the UAE, said his team had to play their best cricket to upset the West Indies.

"We have to respect the opposition. West Indies on the day, Chris Gayle comes at you and he'll beat people single-handedly. So you know, it's just a matter of doing things the right way," he said.

Zimbabwe have performed creditably at the World Cup and had their moments against South Africa.

They had their border rivals struggling at 83 for four before century-makers David Miller and JP Duminy mounted a 256-run rescue mission to lift the Proteas to 339.

In reply, Zimbabwe reached 191 for two before they lost their last eight wickets for just 86 runs.