PARIS - Liverpool return to the scene of the greatest moment in their recent history in the Europa League on Thursday as Tottenham Hotspur go to Italy just three days before the English League Cup final. 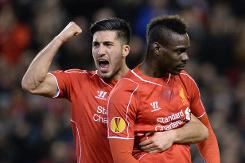 Liverpool's Mario Balotelli (R) celebrates scoring a goal with teammate Emre Can during their UEFA Europa League round of 32 first leg match against Besiktas, at Anfield in Liverpool, north-west England, on February 19, 2015

The Ataturk Olympic Stadium will forever be remembered by Liverpool fans as the scene of their remarkable triumph in the 2005 Champions League final, when they came from 3-0 down to draw level at 3-3 with AC Milan before winning a penalty shoot-out to lift the European Cup for the fifth time.

On this occasion, the only prize on offer in the round-of-32, second leg is a berth in the last 16, and Liverpool hold the upper hand in the tie after a late Mario Balotelli penalty secured a 1-0 win at Anfield last week.

The Reds are unbeaten in seven games while Besiktas -- who are playing at the Olympic Stadium while their own ground overlooking the Bosphorus is rebuilt -- were knocked off the top of the Turkish Super Lig at the weekend after losing 1-0 to Eskisehirspor.

"We did not show the fight and work rate we usually do, I expect all my players to put in a lot more effort on Thursday."

Meanwhile, Tottenham face a make or break few days in their campaign as they go to Florence having to score in the second leg of their tie against Fiorentina after drawing 1-1 at White Hart Lane.

The match in Italy will be a huge test of Spurs' resolve with Fiorentina unbeaten in 10 games and with the small matter of the League Cup final against Chelsea at Wembley following on Sunday.

"It will be a difficult game," said Tottenham manager Mauricio Pochettino. "I think this is our first final before Sunday as Fiorentina are only one game from going into the next round. We know that we need to score, but we are confident."

Top goalscorer Harry Kane was one of those who sat out last week's first leg and may be kept back again with one eye on the Chelsea game.

"We'd be gutted if we go out of the Europa League," added midfielder Nabil Bentaleb as he insisted that Spurs are not taking the continental competition lightly.

"We're going to go on Thursday to Fiorentina to win that game. If we start thinking like this we're not going anywhere. We have to keep that hunger we have inside us to want to win everything."

Everton already have one foot in the next round as they host Swiss side Young Boys having won 4-1 in Bern last week with Romelu Lukaku scoring a hat-trick.

As they struggle in the league, they could be forgiven for being distracted by Sunday's trip to Arsenal, but midfielder James McCarthy said Everton minds are only on continuing their European run.

"We have a big lead but we won't take any prisoners. We have come back from a great result in Europe and we need to try and get the wins at home. The fans have come out in their numbers and we need to go again on Thursday," he told the club's website.

Meanwhile, Celtic also go to Italy needing to score as they face Inter at the San Siro after a thrilling 3-3 draw in Glasgow.

Inter have the edge in the tie and have been gradually improving recently under Roberto Mancini but Celtic captain Scott Brown is hopeful the Scottish champions can pull off a shock.

"We will probably go there, try to press them high up the park again and prey on their mistakes. If we do that who knows what can happen," he said.

Other second-leg ties to look out for on Thursday include holders Sevilla's trip to Germany to defend a 1-0 first-leg lead against Borussia Moenchengladbach.

Meanwhile, a week after their fans made headlines for trashing one of the best-known squares in the Italian capital before a 1-1 draw with Roma, Feyenoord welcome the Serie A side to Rotterdam.