LIVERPOOL - Liverpool manager Brendan Rodgers said his side had paid the price for their stunning recent form after they were held 0-0 by Blackburn Rovers in the FA Cup quarter-finals. 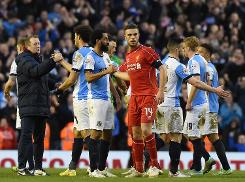 Having gone 12 games unbeaten in the league, winning seven of their last eight matches, Liverpool were expected to breeze past second-tier Blackburn and give captain Steven Gerrard a chance to lead his team out at Wembley at least one more time before leaving at the season's end.

But instead they were frustrated by a disciplined and hard-working Blackburn team, who will hope to pull off a repeat of victories over Stoke City and Swansea City in the replay at Ewood Park in early April.

"The last three months we have been in outstanding form, but that (the dip) is natural," Rodgers said.

"There is a physical energy in how we play and it is natural sometimes there will be a little bit of cost and that affected the speed of our play.

"Give Blackburn credit. They defended in a low block really well and put their bodies on the line and made it really difficult for us."

Describing himself as "not overly disappointed" by the result, Rodgers said the bottom line was that Liverpool were still in the tournament.

"We are still there to reach the semi-finals," he said.

"Of course you want to do it and get through, but we will have plenty of coaching time to work. It just wasn't to be."

Gerrard missed Sunday's game as he continues his recovery from a hamstring injury, but Rodgers said the 34-year-old -- who turns 35 on the day of the final -- would be fit for the league trip to Swansea on March 16.

Rodgers also provided a positive update on the health of centre-back Martin Skrtel, who was stretchered off after a third-minute aerial collision with Rudy Gestede and taken to hospital for a check-up, but who the Liverpool manager said was "fine".

With the bruising Gestede sowing panic in the home defence, it was Blackburn who went closest to breaking the deadlock, with Simon Mignolet forced to palm a header from Alex Baptiste over the bar early in the second half.

At the other end, Simon Eastwood saved from Daniel Sturridge and Jordan Henderson late in each half, but although the Blackburn goalkeeper was otherwise well shielded, Rodgers felt the hosts should have had a penalty after Matthew Kilgallon stepped across Adam Lallana in the first half.

"I definitely thought we should have had one (penalty)," Rodgers said.

"Adam Lallana's challenge in the first half, it was a great move and he got his body between the man and the ball and as he went to shoot, he was knocked over. I thought that was a clear penalty."

The result was something of a triumph for Blackburn, whose fans celebrated the impending 20-year anniversary of the day they claimed the Premier League title at Anfield by chanting the name of late former owner Jack Walker in the game's 20th minute.

It is three years since Blackburn slipped into the second tier, amid a period of damaging managerial upheaval under India-based owners Venky's, and current manager Gary Bowyer said Sunday's result was the fans' reward for staying loyal through the bad times.

"It's been well-documented, what we've been through, and they're the ones that suffer most," said Bowyer, who was missing several key players through injury.

"They've sung their hearts out for 90 minutes. I can't remember them ever stopping. I thought in the 20th minute, to show their appreciation of the success of winning the Premier League was a real fitting gesture."

Rodgers complained that the Anfield pitch had not facilitated Liverpool's usual passing style, but Bowyer predicted that the Northern Irishman would be in for a shock at Ewood Park.

"Wait until he sees Ewood," he said. "He'll think this is Wembley."

A non-conquering hero! Flitcroft: The Phantom of the Open