DHAKA - Bangladesh's opposition called a temporary halt Tuesday to its campaign to topple the government as the deeply-divided nation united to celebrate its qualification for the quarter-finals of cricket's World Cup. 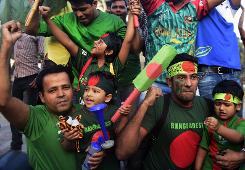 Newspaper front-pages, usually dominated by reports of protests and firebombings as part of a months-long political crisis, all led with Monday's dramatic win over England in Adelaide which guaranteed the Tigers' place among the tournament's last eight for the first time.

And as the press hailed the cricketing heroes for giving the country a much-needed lift, the main opposition Bangladesh Nationalist Party (BNP) called off the latest in a series of nationwide strikes to allow people to celebrate the "unforgettable triumph".

More than 100 people have died in political unrest since the start of the year when BNP leader Khaleda Zia launched a campaign to force fresh elections but police said there were no reports of violence overnight.

It is the first time that the BNP has halted its campaign against the government of Prime Minister Sheikh Hasina who was among the first to congratulate the team for their victory.

With political hostilities suspended for the day, hundreds of supporters of Hasina's Awami League party staged a victory procession at Motijheel, the main commercial district in the capital Dhaka.

"It's heartening to witness the exhilaration of fans and see spirits uplifted at a time when the country is clouded in political crisis," said the main editorial in the Dhaka Tribune newspaper on Tuesday.

"We will not be exaggerating if we say that at a time of crisis, especially the one Bangladesh finds itself in, the Tigers have brought us together," said the Daily Star.

Many newspapers described the 15-run victory as the country's greatest sporting triumph since it gained independence from Pakistan in 1971.

While the game is hugely popular throughout Bangladesh, the team have been international cricket's whipping boys for much of the last two decades and few people expected them to get through to the business end of the tournament at the expense of England.

Prothom Alo, the biggest-selling daily, called the victory "an immortal poem", adding that it "opens the door to a dream" with Bangladesh possibly facing holders India in the knock-out phase of the competition.

Swiatek sails through as Gauff survives