VILLA CASTELLI (ARGENTINA) - Four top French athletes and crew from a reality TV show were cleared to return home after the tragic helicopter crash which killed 10 cast members and colleagues. 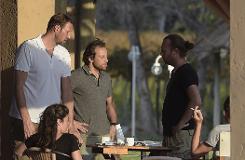 French Olympic champion swimmer Alain Bernard (L) and figure skater Philippe Candeloro (2-L) with colleagues at a hotel in Villa Union, in the Argentine province of La Rioja, on March 12, 2015

"I spoke to the people I needed to speak and gathered their testimony and I have decided to allow all members of the production and participants to return to their country," Herrera told AFP.

There were no survivors in Monday's deadly collision between two helicopters that were filming the reality series "Dropped" in the rugged terrain of La Rioja province.

An agent for one of the sports stars spoken to Thursday said the entire group would take a Friday night flight to France, arriving in Paris Saturday morning -- a plan confirmed by a source close to the case.

A team of officers from France's gendarmerie police force was meanwhile en route to join their Argentine counterparts to comb through the charred wreckage of the helicopters and work to identify the bodies.

Investigators from France's air accident investigation authority, the BEA, as well as helicopter manufacturer Airbus Helicopters and engine maker Turbomeca, are already working at the scene, where they have begun dismantling the aircraft, looking for clues.

Argentine forensic experts are waiting for their French counterparts to arrive to begin identifying the victims' remains, a local coroner said.

Investigators will have to rely on dental records or DNA tests to identify the badly burned bodies, officials say.

"Dropped," which was to air on French channel TF1 but was immediately canceled after the crash, featured sports stars who were taken blindfolded into rugged environments and given 72 hours to get to a place where they could charge a mobile phone.

Arthaud, 57, was considered one of the best sailors in the world, conquering what had been a male-dominated sport. Her titles included the 1990 Route du Rhum, the most prestigious transatlantic solo race.

In an interview with AFP, figure skater Candeloro said: "We're left asking ourselves, 'Why them and not us?'"

He also described rushing to the crash site from the spot where he had been waiting his turn to fly to the next shoot.

Amateur video taken from the ground showed the helicopters flying extremely close, their rotors clipping and both aircraft plummeting.

"We rushed to the scene of the accident and when we arrived, the helicopters were in flames. There was nothing we could do," Candeloro said.

"We wanted to help them but we were powerless because of the fire. We didn't have water or a fire extinguisher. It was in the middle of the bush."

The final participant on the show was former international and Arsenal footballer Sylvain Wiltord, who had already returned to France before the crash.

Mission accomplished: Dressel, Ledecky get the job done with wins at US trials

I was expecting more, admits Spain coach Luis Enrique after another draw