5 goals not enough to save Buriram
Sports

5 goals not enough to save Buriram

TOKYO - Gamba Osaka beat Seongnam FC 2-1 on Tuesday to reach the AFC Champions League last 16 and dash the hopes of Buriram United, who went out despite thrashing Guangzhou R&F 5-0. 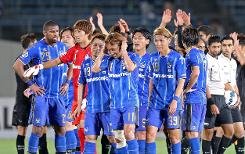 Gamba Osaka celebrate their victory over South Korea's Seongnam FC during the AFC Champions League group F match in Osaka on May 6, 2015.

Takashi Usami and Brazilian striker Lins scored in the second half as the Japanese treble-winners came from a goal down against Seongnam to qualify top of Group F.

But Gamba's win was a heart-breaker for Thailand's Buriram, whose five-star display at their Thunder Castle stadium wasn't enough to earn them a place in the knock-outs.

On the final night of games in Group E, Jeonbuk Motors went through in style with a 4-1 win over Shandong Luneng, while already-qualified Kashiwa Reysol lost 1-0 to Binh Duong.

At Buriram, Guangzhou twice rattled the woodwork early on before Diogo opened the floodgates for the home side with an assured finish on 12 minutes.

Gilberto Macena fed his fellow Brazilian with a curling ball into the box which Diogo cushion-volleyed past Guangzhou 'keeper Zhang Shichang.

Chinese defending was suspect for Buriram's second, when Venezuelan centre-back Andres Tunez leaned into his marker to nod home a corner all too easily.

And Diogo pounced for his second seven minutes before half-time, when he was first to a loose ball and slapped his shot low and into the net to make it 3-0.

Buriram didn't stop after the break and Diogo completed his hat-trick before Macena got on the scoresheet with half-an-hour to go.

But there were grim faces in the Buriram dug-out when news arrived that, eight minutes from time in Osaka, Lins had scored the goal which would seal their elimination.

In Group E, Jeonbuk needed only a draw against Shandong but goals from Lee Jae-Sung, Kim Hyung-Il, Eninho and Edu showed that the 2006 winners mean business in the knock-outs.

Koeman seeks extra time as Barca get set for Benfica

France's Dupont suceeds Kolbe as Top 14 player of the year