Doping ban 'a gift and a curse', admits in-form Gatlin

MONACO - A four-year doping ban served between 2006-10 has been both "a gift and a curse", controversial in-form American sprinter Justin Gatlin admitted Thursday. 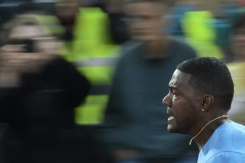 A four-year doping ban served between 2006-10 has been both "a gift and a curse", controversial in-form American sprinter Justin Gatlin, pictured on July 9, 2015, admitted

In an interview with AFP ahead of Friday's Diamond League meet in Monaco, Gatlin acknowledged that hitting the peak of his form at the age of 33 was connected to sitting out four seasons of track action after a positive test for testosterone.

With Jamaican Usain Bolt struggling with a pelvic injury, the American will head to next month's Beijing world championships as firm favourite in both the 100 and 200m, having set a personal best of 9.74 seconds over the 100m in May as part of an unbeaten streak of 26 races dating back to August 2013.

Gatlin won the 2004 Olympic 100m title and was 2005 world sprint double gold medallist, but then served his second doping ban before returning to nail the 2012 world 60m indoor title, Olympic bronze at the London Games and a world silver in Moscow a year later.

"Theoretically I never had any injuries, I've been away from the sport for four years -- I literally didn't run for four years, so my body's been rested," Gatlin told AFP of his longevity and current prowess.

"My body feels it's like a 27-year-old instead of a 33-year-old who's run those four years and feels tired.

"My being away from the sport has been a gift and a curse in a way. For me it's saddening I had to be away, but I'm able to have had adequate rest and sit back and see my opponents and their growth and use that to my advantage."

There is never a shortage of people willing to shoot Gatlin down. He was shunned by organisers of this month's London Anniversary Games, when Bolt makes his comeback.

And track and field's governing body, the IAAF, recently changed their rules for their prestigious Athlete of the Year awards, insisting that a convicted doping cheat was not eligible.

"I wasn't elected last year, I'm fine with that," he said in reference to last season, when he was the world's top sprinter but was taken off the IAAF list for best male athlete after some complaints.

"I really have no thoughts on it. I'm just focused on running each year and staying healthy. The most important thing for me is to be able to obtain the medals and be on the podium, that's what we're really here for as athletes.

"The fans on your side will congratulate you and cheer for you and that's what really matters.

"The only question is why haven't these (IAAF) rules been put in a place before? If I wasn't number one last year, no one would make a fuss about it. There's nothing I can do except go out there and keep running and pushing the envelope.

"Exciting the crowd in a good way or a bad way, you love me or you hate me, that's what it is now."

The doping bans, Gatlin said, are "part of my past: the good and the bad, my gold medals and suspension away from the sport. But I think more people and reporters should go more in depth and realise what kind of person I am".

Turning to the August 22-30 Beijing worlds and a potential showdown with Bolt, Gatlin said he would return to his Florida home in Orlando for three weeks after Monaco before joining up with the US team at a training camp in Japan from August 10.

"All the hard work is done now, it's just about staying sharp for competition," he said, adding that he had become an outspoken role model for younger training partners.

"They hang on to my every word. I'm like the on-court coach, like (basketball stars) Kobe Bryant or LeBron James!"

Gatlin refused to put an age on a potential retirement from the sport, adding that he jokes with training partners that if he didn't make the US team for Rio, he would stick around for 2020, but also predicted a big change in track stars.

"Hopefully I've got a good stretch of years right now in front of me and we'll see how that goes for me," he said.

"But it's not just one person coming through, it's a generation. I think we're going to see a big changing of the guard."

However for the moment, Gatlin was content to label himself a "warrior" ready for competition.

"I love the fearlessness when you get in the blocks, the mental warfare, shoulder-to-shoulder with other guys ready to run," he said.

"We go out there as warriors and fight for nine seconds. I take my hat off to all the people who've trained very hard."