Danai Udomchoke, one of Thailand’s most successful tennis players, announced his retirement last week, bringing to an end a 17-year-long career punctuated by both jubilation and despair.

“It’s a ‘beautiful end’ after winning gold [in the men’s team event] at the SEA Games [in Singapore last month].”

Danai has also been a part-time commentator on Fox Sports and a coach.

The best moments of his career came at the 2006 Asian Games in Doha where he won the gold medal in the men’s singles after beating South Korean Lee Hyung-Taik 7-5, 6-3 in the final.

It seemed like fate intervened that year, as Paradorn Srichaphan was Thailand’s top player at that time.

However, injury forced Paradorn to withdraw from the Games, paving the way for Danai to claim his biggest prize.

Danai turned professional in 1997 and his illustrious career spanned over 17 years.

Although he stands at only 172cm tall, it didn’t hamper his progress on the court at all. His powerful ground strokes coupled with a booming backhand were enough to upset his opponents.

After turning professional, his first Grand Slam appearance was in the main draw of the 2004 US Open which ended in a loss to Spaniard Tommy Robredo in straight sets. 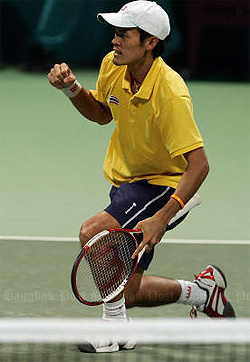 One of Danai’s highest profile matches was his 2006 Australian Open first round encounter with Argentina’s David Nalbandian.

He shocked Nalbandian by winning the third and fourth sets, but a lack of both energy and experience of playing five-set clashes saw Danai let the then world No.3 off the hook and go down 2-6, 2-6, 6-1, 7-6, 1-6.

At the 2007 Australian Open, Danai stunned Spain’s Juan Carlos Ferrero before losing to a young Novak Djokovic in the third round.

And in the same year, the Thai player also qualified for Wimbledon and was defeated by Andy Roddick in the second round.

Danai won the gold medal at the World University Games in 2007 which were held in Bangkok, handing fancied South Korean An Jae-Sung a defeat in the title showdown.

In the SEA Games, Danai has won two gold medals, both of them in the team event.

His last gold medal in the SEA Games tournament was the men’s team event in the 28th SEA Games in Singapore this year.

His highest singles world ranking was No.77 in 2007 while his ranking just before retiring was 342.

In the Davis Cup, Danai was a part of the 2002 Thai team that reached the World Group play-offs for the first time. Thailand played against Great Britain but were narrowly defeated 3-2.

Danai lost 3-1 to Tim Henman in the first match but then went on to beat Arvind Parmar in two sets. At the time, Paradorn was Thailand No.1 and Danai was No.2.

When a lingering wrist injury forced Paradorn to retire in 2007, Danai had to step into the Thai hero’s shoes as he took over the country’s No.1 spot.

Danai is currently coaching Lu Yen Hsun of Taiwan. Together they won the doubles title at the 2012 Thailand Open, which was Danai’s only triumph in an ATP-level tournament.