PARIS - Former Formula One world champion Jacques Villeneuve is coming out of retirement to compete in the Formula E championship next season. 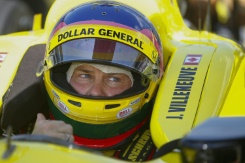 Jacques Villeneuve in practice for the Indy 500 at the Indianapolis Motor Speedway on May 11, 2014

The 44-year-old became the only Canadian to land the F1 title in 1997. The winner of 11 grand prix he moved on to compete in the Le Mans 24 Hour and had a spell in NASCAR.

The son of the late Gilles Villeneuve, who also has an Indianapolis 500 success to his name, will drive alongside Frenchman Stephane Sarrazin for Venturi, replacing Nick Heidfeld.

"This is the first time in several years that I will participate in a full championship," said Villeneuve, who tested for the team in France last week.

"It had been 10 years since I had driven on that kind of track with a single-seater, but it's like riding a bike, you never forget.

"Last season each time I met drivers from Formula E they were saying it is a really interesting championship.

"I am excited because the atmosphere in the team is great and that has a very big influence."

Formula E's first season, which concluded in London in June, was won by Briton Sam Bird driving for Virgin.

Monaco-based Venturi are debutants in the all-electric eight constructor championship for Formula E's second season which kicks off in China in October.