KAMPALA - Uganda's Olympic and world marathon champion Stephen Kiprotich said he was "feeling good" on Monday as he flew out for the world championships in China. 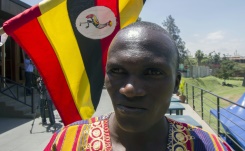 Speaking at a flag hand-over ceremony in Kampala, Ugandan athlete Stephen Kiprotich said he was "prepared" for the forthcoming world championships in Beijing

Uganda is an emerging distance running country that is establishing itself as a challenger to the dominance of neighbouring Kenya and Ethiopia.

Kiprotich, who worked as a prison warden, claimed the second ever gold medal for his country when he won the men's marathon at the 2012 London Olympic Games.

At a flag hand-over ceremony in Kampala with 10 other athletes, he said he was "prepared" for the International Association of Athletics Federations (IAAF) world championships starting on Saturday in Beijing.

"At this time I'm feeling good, my health is okay," the 26-year-old told AFP.

"I've done very well, yes," he added, referring to his previous wins, which include a 2013 world marathon gold medal in Moscow.

"You know to do something better you have to do hard work, so I've done hard work. I'm always focusing on my competition, my training," he added.

He has been a water brand ambassador, has a hotel in Kapchorwa, eastern Uganda, where there is an athletes' training base named after him, and stars in a new Ugandan movie.

He was said to have received 200 million shillings ($56,577) and a car from the country's president, while his parents had a house built for them after his London win, according to the Uganda Athletics Federation (UAF).

"My family is doing well and they're happy I'm going for the championships," said Kiprotich.

"The surprise was Kiprotich winning in London," he told AFP. "All our athletes are in good form and we expect them to perform well."