JOHANNESBURG - William Jebor staged a one-man demolition act Tuesday to take Liberia into the second round of 2018 World Cup qualifying in Africa. 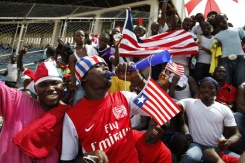 A Liberian supporter blows a vuvuzela horn during the 2014 FIFA World Cup qualifying football match Liberia vs Senegal on June 16, 2013 at the Samuel K. Doe Sports Complex in Monrovia

The 23-year-old striker from Spanish second-tier club Ponferradina scored a hat-trick as the Lone Stars atoned for a poor first-leg showing by winning the return game 3-1 in Guinea-Bissau.

Liberia qualified 4-2 on aggregate after being held 1-1 in Monrovia last Thursday and face reigning African champions Ivory Coast next month in another home-and-away tie.

Jebor did not take long to make his mark at Stade du 24 Septembre in Bissau on the west coast, scoring after eight and 12 minutes.

That left the hosts needing to score at least three times under the away-goal rule and Ibraime Cassama pulled one back just before half-time.

But it was the Liberians who had the final say with Jebor completing his hat-trick six minutes into stoppage time.

Jebor also scored in the first leg, taking his first-round goal tally to four and a share ot top spot on the scorers' chart with Nigerien Moussa Maazou.

Chad, who suffered a four-goal home drubbing from Egypt in a Cup of Nations qualifier last month, were surprise World Cup winners at the expense of higher-ranked Sierra Leone.

Forced to play the return match in Nigerian city Port Harcourt because of the Ebola epidemic, a Sierra Leone side trailing 1-0 from the first leg fell further behind on the stroke of half-time.

As in N'Djamena last Saturday, winger Leger Djimrangar was the Chadian scorer, and his goal left the Leone Stars needing a minimum of three to survive.

Success offers Chad another crack at Egypt, winners of a record seven Cup of Nations title but World Cup qualifiers only twice.

Comoros, an east-coast island state, celebrated success for the first time in World Cup qualifying despite not winning either match against Lesotho.

Held to a goalless draw in Moroni six days ago, the Comorans came from behind to draw 1-1 in Maseru and advance on away goals.

Tsepo Seturumane put the Lesotho Crocodiles ahead on 17 minutes, but the 'insurance' second goal they needed never came at Setsoto Stadium in the tiny mountainous southern Africa country.

The hosts paid the price 19 minutes from time when Mohamed M'Changama, one of numerous French lower-league footballers on view, levelled.

Mauritania, a rapidly improving side under French coach Corentin Martins, showed World Cup debutants South Sudan no mercy with a 4-0 triumph in Nouakchott.

Having drawn 1-1 in Juba last week in a match that took 19 hours to complete because of rain, the Mauritanians needed just four minutes to go in front at home through Moulaye Ahmed Khalil.

First-leg scorer Boubacar Bagili doubled the advantage on 62 minutes at the Stade Olympique and there were late goals from Moussa Samba and Ismael Diakite.

Namibia had a much tougher passage, clawing back to edge Gambia 2-1 in Windhoek after a drawn first leg with the tie-clinching goal coming from Hendrik Somaeb.

Madagascar, Burundi, Niger and Botswana also advanced to the second round while the Swaziland-Djibouti tie was postponed by FIFA for unexplained "logistical reasons".

'I promised my mother': MMA champion Nurmagomedov in shock retirement