MILAN - Shell-shocked Roma's title hopes were kept in check by a chastening 2-0 home defeat to Atalanta on Sunday that has piled further pressure on the club's French coach Rudi Garcia. 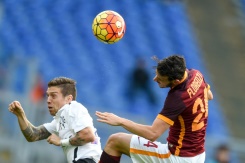 Roma's midfielder from Italy Alessandro Florenzi (R) and Atalanta's midfielder from Argentina Alejandro Gomez jump for the ball during the Italian Serie A football match AS Roma vs Atalanta on November 29, 2015 at Rome's Olympic stadium

Roma were firmly in the title hunt, comfortably in fourth place and three points behind leaders Inter Milan, going into their first league game since a humiliating 6-1 defeat to Barcelona in the Champions League on Tuesday.

But the Serie A hopefuls, still missing forwards Gervinho and Mohamed Salah, looked uninterested on their way to a third defeat of the campaign that kept them in fourth but now in danger of seeing their gap on leaders Inter grow to six points.

Garcia came in for plenty of criticism in the wake of his side's Nou Camp calamity, but he rejected suggestions the impact of the defeat had left his side shell-shocked.

"No, I don't think so. We'll prove that by getting the results we need in the future," he told Mediaset.

But the Frenchman admitted he is now looking for excuses after a display for which the whole team felt "responsible".

"There's not much to say, we didn't have a winning attitude and we made a lot of mistakes. Now, we have to keep quiet and get to work.

"It's been a tough week, I know that. But the squad can show its mettle by putting this behind us. We're all disasppointed, but we're all responsible."

The hosts showed plenty of enterprise in a promising first half but paid for several misses when Alejandro Gomez struck and German Denis doubled Atalanta's lead from the spot at the death.

Miralem Pjanic, Edin Dzeko and Juan Iturbe all kept Marco Sportiello in the Atalanta goal on his toes during a busy 40 minutes.

Roma looked to be in command but the Stadio Olimpico was stunned into silence five minutes before the interval when French left-back Lucas Digne gave possession away cheaply.

Digne's blind effort to clear up the right flank instead gifted possession to Gomez, whose drive from 25 yards out beat Morgan De Sanctis at the 'keeper's far top corner.

Pjanic came close to levelling eight minutes after the restart only to see his glancing header from a corner cleared off the line by Luca Cigarini.

But a confident Atalanta were soon in command, and De Sanctis had to be at his best on the hour mark to stop Maxi Moralez on a one-on-one after the Argentinian had been sent through by Radja Nainggolan's mistimed header.

But it was to get even worse for Roma after the big Brazilian, 10 minutes after his arrival, saw red after a mistimed challenge on Gomez inside the area.

Denis stepped up to beat De Sanctis from the penalty spot to double Atalanta's lead on 82 minutes.

Even after Guglielmo Stendardo and Alberto Grassi saw red in the dying minutes for second bookable offences respectively to leave the visitors with nine men, it did little to dampen Atalanta's post-match celebrations.

Atalanta coach Edoardo Reja told Rai: "We came here to win and did very well, although the key was being clinical when it came to our chances."

Roma remain three points behind Inter but could be six adrift if the Nerazzurri upset the form book to beat in-form Napoli, in second two points adrift, on Monday.

Inter coach Roberto Mancini, however, admitted: "It's our first big test against a direct rival away from the San Siro, so we have to give it everything.

"Beating Napoli would give us a huge boost, but there are plenty of games to come before it's all decided."

On Monday. Fiorentina, also just two points off the pace, are away to Sassuolo.

Roma's loss means AC Milan remain fifth, only four points further back, after their 4-1 drubbing of Sampdoria on Saturday.

Champions Juventus are seventh, nine points behind Inter, ahead of their trip to Palermo later on Sunday, when Empoli host Lazio.